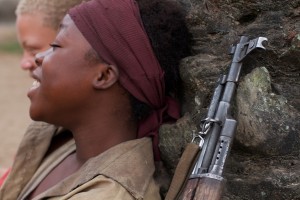 More international magical mystery from a Québec filmmaker: Kim Nguyen’s “War Witch” (Rebelle) seems a cousin to Denis Villeneuve’s 2010 “Incendies,” coursing its myth across the Middle East in bold visual terms (as well as “Beasts of the Southern Wild,” distantly). Komona (Rachel Mwanza) is a twelve-year-old girl enlisted against her will to become a rebel in an unamed African country (while shot in Congo) but who also has a raft of magical powers. Horror and whimsy alternate, to often impressive result. Things occur to the child soldiers onscreen. Ordinary moments; atrocity. They simply occur. Mwanza, a non-actor off the streets of Kinshasa, is key to the film’s success, as well how the matter-of-factness is conveyed with neo-documentary urgency in Nicolas Bolduc’s largely handheld camerawork. 89m. (Ray Pride)