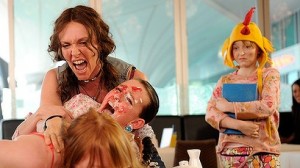 After a middle career making movies in the U. S. like “My Best Friend’s Wedding” and “Peter Pan” (2003), PJ Hogan returns to his Australian roots with the autobiographical “Mental,” two decades past his early success with “Muriel’s Wedding” (1994). Set in the fictional suburban beach town of Dolphin Heads, “Mental”‘s brood of lead characters are the Moochmore girls, each equally convinced they are suffering various psychological disorders: one would much rather be mental than simply unpopular. Their “Sound of Music”-obsessed mother goes “on holiday” after suffering a mental breakdown, leaving the philandering politician father (Anthony Lapaglia), the local mayor, to care for five girls he barely knows.He picks up a pit-bull-wielding drifter named Shaz (Toni Collette) alongside the road who quickly assumes the pot-smoking Mary Poppins role. Armed with a blade in her boot, an old psychologist’s handbook—as well as being slightly unhinged herself—Shaz escorts the girls around town to confront those who made their mother feel bad. Along the way, wouldn’t you know, Shaz shows that the conformity of suburbia is a breeding ground for mental issues despite how normal they seem on the surface. Liev Schreiber takes an offhandedly surreal approach as the boss of eldest daughter Coral, obsessed with using sharks as an analogy for everything (“I’ve battled insanity and it’s a shark!”). Appropriately cringeworthy at times, Hogan’s eager cast lends comedic method to what might only have been madness. 116m. (Julie Gavlak)