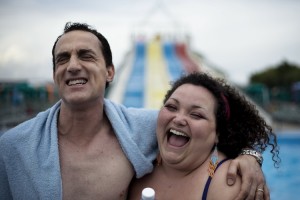 Matteo Garrone is a cheeky, vulgar, amped-up director, given to grandiloquence and fantastically busy camerawork embellishing a sturdy sense of place, and he’s good at it, even when sentimentality swamps his instincts and settles his filmmaking into mere kitsch. He’s Italian! And in his fierce, confident 2008 Neapolitan crime saga, “Gomorrah,” Garrone rose to the top of the local heap of stylishness. “Reality” pushes a Naples fishmonger who’s also a small-time swindler into the choppy waters of the local edition of “Big Brother.” Fairytale-scale wish-fulfillment is promised even within a critique of the manufactured false idols of our modern age that rings with an awareness of “The Truman Show”‘s less affectionate take on media exaltation of the emptiest everyman. Pleasingly played and sound-stamped by a simpering Alexandre Desplat score, “Reality” is a pleasing confection even when its satirical jabs fall to earth. With Aniello Arena, Loredana Simioli, Nando Paone, Graziella Marina, Claudia Gerini. 105m. (Ray Pride)

“Reality” is now playing at the Music Box. A trailer is below.