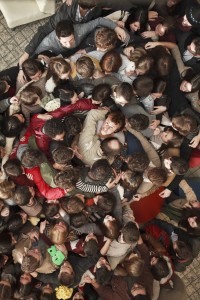 Québécois director Ken Scott builds a pro-natal comedy around David Wozniak (Patrick Huard), an immature forty-two-year-old single man who donated a lot of sperm in the late 1980s. This shaggy, affable underachiever works for his dad, making unpunctual meat deliveries. Hydroponic pot cultivation looks like a sideline for paying off a never-explained $80,000 debt. Whomever he owes, they only appear in bad dreams and try to drown him in his bathtub. Valerie (Julie LeBreton), his cop girlfriend, recently split. She is pregnant. Guess who will grow up before she births her first? It’s his, but not his first. The clinic dispensed his seed to 533 women. Now 142 of those offspring are suing to out “Starbuck,” the anonymous donor. David starts tracking down his biological sons and daughters. Using false names, he enters their lives as a self-appointed “guardian angel.” They see him as an iffy, goofy pal old enough to be their dad, or something. Oddly, no birth mothers or legal fathers enter the picture. The familial sentiment alternates between corny and tearjerky, yet “Starbuck” still hits a few sincere notes. Scott’s gestating English-language remake starring Vince Vaughn is due to crown next fall. With Antoine Bertrand, Dominic Philie, Marc Bélanger, Igor Ovadis, David Michaël, Patrick Martin. 108m. (Bill Stamets)
“Starbuck” opens Friday at Landmark Century.
Ray Pride