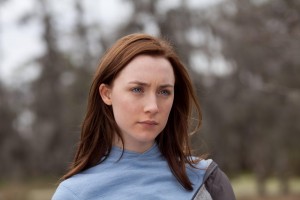 Instead of hot vampires and hotter werewolves we’ve come to expect from a project bearing Stephenie Meyer’s name, science-fiction adventure “The Host” looks skyward. Its world is at peace, in harmony with nature, with everyone working optimistically toward the advancement of humanity. This Utopian society would seem ideal, if not for the parasitic alien species behind it all. Director Andrew Niccol is an interesting choice to direct the first of this potential franchise, drawing on the interest in ideals of human perfections and inevitable frailty shown in movies like “Gattaca” and “In Time.” The “souls'” of “The Host” possess humans, mind, body and spirit, leaving only a bright blue, mirrored ring around the irises of the eye as a telltale sign of infestation. Only a few pockets of humans remain underground, near extinction. Melanie Stryder (Saoirse Ronan) is one rebel determined to stay human. While on the run with her brother Jamie, she meets another survivor Jared, and the three team up and continue to evade capture, with Melanie and Jared falling in love during this time together. (The casting of the male characters, annoyingly, relies too much on the same physical type, making it hard at times to tell them apart.) A run-in with “Soul”-infested humans leads Melanie to choose death over capture, but the Souls restore her broken body, implanting her with a thousand-year-old soul called “Wanderer,” which she uniquely resists. More battles, more complications, and much more concocted language result. While Niccol’s film is more assured than any of the films of the “Twilight” saga, “The Host” still bears the predictable situations of Meyer’s best-selling imagination: who else would create a love triangle involving four people with two occupying one body, and still somehow tie it with a so-perfect happy ending? Saoirse Ronan’s performance offers the greatest pleasure, even if much of it consists of talking to herself. With Max Irons, Diane Kruger, Jake Abel, Rachel Roberts, Chandler Canterbury. 125m. (Julie Gavlak)