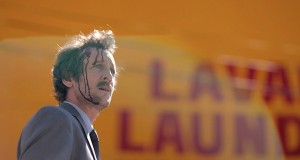 Quentin Dupieux’s prior excursion into deadpan illogic and intermittent surrealism, “Rubber,” followed the exploits of a killer tire. “Wrong” is weird, too, in brightly colored, handmade, shambling fashion. A shaggy lost-dog tale, the exceptionally flat “Wrong” doesn’t create its own alternative world, as “Rubber” did in sometimes-explosive fashion (as in exploding heads), but instead slows, elongates and randomizes daily life as not worth living in a meaningless suburban world. Meaninglessness is a dangerous subject to caress, and reaching toward a no-budget Charlie Kaufman world with a loser protagonist (Jack Plotnick) looking for a lost dog in a world rife with random events is also a dodgy dance. Dupieux is a French musician, writer, cinematographer, editor and director, if not quite a maker of American comedy. With the ineffable William Fichtner as the threatening Zen adept “Master Chang,” who susses Dupieux’s comic conundrum early on: “Man gets inured to things rapidly.” The advanced likes of Buñuel would have stepped off for a martini even more rapidly. In English, perhaps translated from French or other languages. “Wrong”‘s international roster of producers includes agnes b., a longtime supporter of Harmony Korine, including co-producing “Spring Breakers.” With Eric Judor, Alexis Dziena, Steve Little. 94m. (Ray Pride)

“Wrong” is now playing at Facets. A trailer and two clips, below, offer a taste of Dupieux’s taste.