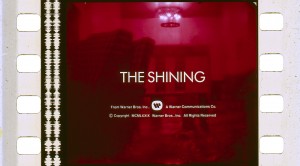 A sinister lark that functions at once as satire of both the obsession of fans and the niggling habits of film critics, Rodney Ascher’s “Room 237” uses Stanley Kubrick’s “The Shining” as fodder for a murmurous assemblage of conspiracy theories that veer from placid to maniac. It’s paranoid entertainment about a vivid text and even more vivid contemplations by a film’s perfervid admirers. Like his clever, eerie 2012 short “S From Hell,” which refashioned the Screen Gems syndicated television animation into a close reading of corporate branding run amok, to the point of conspiratorial daffiness. The same curatorial style—found or gathered imagery accompanied by disembodied voiceovers—persists in “Room 237,” but imposed upon a much more complex text. Ascher interviews five compulsive viewers—a professor, a journalist, an artist, a musician and a conspiracy hunter—who believe the movie is seamed with dozens of hidden meanings and conflicting themes, that it was about “genocidal armies” of white men who massacred Native Americans; the faking of the moon landing as well as taking place across a vast topographical impossibility. Their voices overlap as one, like the mass mindlessness of late-late-late-night radio trickling from a car radio from a far-distant 50,000-watt clear channel station. It’s clockwork aren’t-you-clever. Ascher cheekily says that he hopes his alternately brain-searing and brain-numbing kaleidoscope might “shed a little light on the way people interact with powerful works of art, whether a film by one of the few masters of the form, ‘The Last Supper,’ or Madonna’s ‘Like a Virgin.'” “Room 237” pushes the legal concept of “fair use” for commentary or satire beyond the breaking point, making it worthwhile to quote the fantastic, comma-rich disclaimer on the release poster in full: “Neither this film, nor any view or opinion expressed in it, nor the context in which film footage and images are used, is approved or endorsed by, or is in any way associated with, the Kubrick 1981 Trust, Stanley Kubrick’s family, Warner Bros. Entertainment Inc., or anyone else connected with the making of the motion picture The Shining (‘The Shining Filmmakers’). The views and opinions expressed in this documentary film are solely those of the commentators in it and do not reflect the views of Stanley Kubrick or The Shining filmmakers.” Kubrick’s longtime personal assistant Leon Vitale gave the film a modestly epic review the filmmakers ought pride themselves on: “There are ideas espoused in the movie that I know to be total balderdash… it’s pure gibberish.” Jonathan Rosenbaum is almost as good: “at once entertaining and reprehensible… it refuses to make any distinctions between interpretations that are semi-plausible or psychotic, conceivable or ridiculous, implying that they’re all just ‘film criticism’ and because everyone is a film critic nowadays, they all deserve to be treated with equal amounts of respect and/or mockery (assuming that one can distinguish between the two)—that is, uncritically and derisively, with irony as the perpetual escape hatch.”  Still, for the purposes of the release of “Room 237” onscreen and on VOD, it likely doesn’t hurt that a godfather of the film is “Toy Story 3” director Lee Unkrich and proprietor of the Overlook Hotel (theoverlookhotel.com), devoted to “ephemera related to Stanley Kubrick’s Masterpiece of Modern Horror, ‘The Shining.'” Irony? Ephemera? A metaphor for the maze of the internet and its mass mindlessness? “Room 237.” 102m. (Ray Pride)