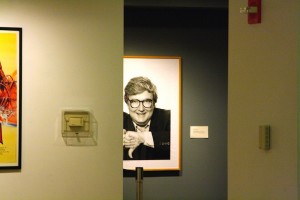 EVERYTHING THAT ROGER EBERT WAS, was a newspaperman, and was because he was a newspaperman. Ink, and then film, and then ink about film. That would include appreciating the movement of careers, the motion of plots, like a sportswriter. That would include the late-night badinage of the ink-stained, as in the many years spent, without regret, at O’Rourke’s and the Old Town Ale House. That would include the competitive urge with The One Across Michigan Avenue, the one called the Chicago Tribune. But also the one called “Gene Siskel.” Plus, words and paper with racy asides and winning wisecracks. (And in later years, wisecracks sketched quickly on a small pad of paper and handed to you.) Television didn’t make Roger Ebert, but in a small, small way, Roger Ebert and Gene Siskel made television. (And when I was a guest on the show after Siskel’s death, Ebert’s key words of advice were, you’re not doing this or that, it’s not even conversation, you’re committing television.) Words. Anecdotes. There are a lot of them. 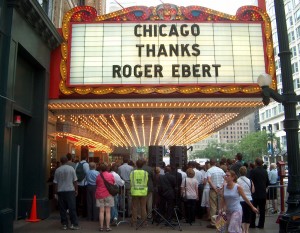 When the movie “Fargo” came out, I saw the segment from their show before writing my review in Newcity, and I opened my notice with the sentence, “Just because Gene Siskel is calling it some damn thing like ‘a new American masterpiece’ is no reason not to see ‘Fargo.'” Gene was a genius of glare: you might wither under his reflected shade. But for a couple months then in the screening room on Lake Street each time our paths would cross, he’d laser in on me like he was going to say something so very weighty, but never did. Then one afternoon, after the time they would have taped a weekly installment, Roger was sitting in the back of the room, seat one, his usual aisle seat in the row farthest back, eating a green Pritikin Diet-scale salad from a small plastic bowl. He had a look in his eyes, a light like on the horizon before a storm. The door banged open. Gene walked in. Roger stood up. “You might want to sit down or you might want to leave, too,” Roger said, grinning, pushing the door open. “What?” I asked. “Gene’s had something on his mind.” The look of glee in Roger’s eyes: the quick, comedy-timed skulk out the door and into the corridor. Gene was prepared to chastise, to call me out for the temerity of challenging him. I could only smile. That flummoxed Gene. I only had a picture in my mind of Roger in the hallway, bowl in one hand, leaning toward the closed door of the screening room, millimeters closer to the sound of a battle where he didn’t have to raise his voice. That tiny smirk, that bit of glee: that had standing with me more than the familiar forensic barrage that “the taller one” who stood in front of me was shit-flinging at my grin.