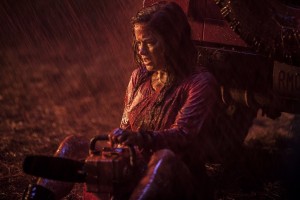 Filthy muck, cranberry-to-crimson spray and gush and relentless, unyielding torture of its characters are the hallmarks of Uruguayan debut feature director Fede Alvarez’s hostile, on-the-nose, off-the-mark charnel-house remake of Sam Raimi’s “The Evil Dead,” which rests in memory more as a series of sustained takes with intermittent loopy humor than a hell-house of would-be entertainment. Splinted, splayed, battered, nail-gunned, burnt, shredded, raped bodies shift in clean geometry across a palette the deep dun-red-brown of aged parchment, with a clinical fixation on incidental vivisection. But, still, c’mon, how could you mistake the intention of a movie when it’s clearly announced in the teaser opening scene, which includes the lines, “I will rip your soul out, Daddy, motherfucker, fuck, fuck, fuck!” (Well, yes, true, Daddy cannot ever be less than a motherfucker.) Or in the deep, spiny woods do you really want to tear wads of wrapping off a book fastened with coils of industrial strength barbed wire and bound in harshly stitched human skin and read scrawled red incantations aloud? You might want to leave it be. This is impractical demonology. And no matter how much of a drug addict you are, and how strong your withdrawal symptoms are, having a horrible writhing limb or vessel or intestinal excrescence vomited out of a wraith’s mouth that then twines up your bare calves and vanishes up your skirt, bound for either your vagina and anus, or perhaps both, you might want to skedaddle. But then, you wouldn’t have a movie, or at least, not this dirty, clammy, grimy, rainy, bloody, sluicey checklist. I’m fine with garish gobbets in geysers of hemoglobin; I’m actually fond of red, but Sam Raimi’s cartoonish raiment and the goonish muse of Bruce Campbell are missed. When everyone’s head-to-foot in red, it’s no longer style, it’s only fashion. “Evil Dead” was a smash sensation at this year’s South By Southwest festival. 91m. (Ray Pride)