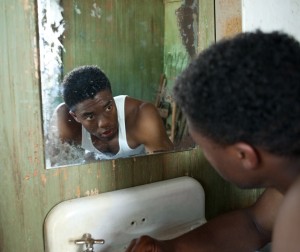 John Roosevelt Robinson, wearing the number 42 on his Brooklyn Dodgers uniform, stepped before 25,623 fans in Ebbets Field on April 15, 1947. This African-American baseball player had far more impact on the sport and the country than the brothers Fleet and Welday Walker ever did playing for Toledo’s Blue Stockings Major in 1884. Chadwick Boseman, the resolute and resourceful Iraq vet in “The Kill Hole,” delivers an effective performance in this worthy biopic by writer-director Brian Helgeland (“L.A. Confidential”). While Robinson is at times a Wheaties Box icon, Brooklyn Dodgers general manager Branch Rickey (Harrison Ford) comes across as a more curious character in “42,” a look at the two years leading up to Jackie’s first season. At one point, Rickey explains his historic decision to hire Robinson: “He’s a Methodist. I’m a Methodist. God is a Methodist.” “This is about helping all of you believe that you can write your own history,” First Lady Michelle Obama coached youth at an April 2 workshop at the White House, attended by Robinson’s widow. “And you’re left just asking yourselves, how on earth did they live through that? How did they do it?” Helgeland renders it with a plethora of heroic slo-mo shots of virtuoso plays, proud faces and swelling music. Despite the flag and pennant waving, “42” succeeds in catching the cultural context. Someone spots “A little white boy pretending he’s a black man.” With Nicole Beharie, Christopher Meloni, Andre Holland, Lucas Black, Hamish Linklater, Ryan Merriman, T.R. Knight. 128m. (Bill Stamets)