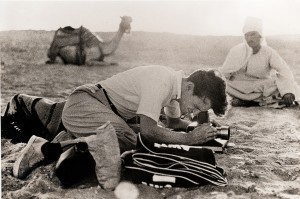 Shannah Laumeister’s ragged, sometimes laughably awful documentary, “Bert Stern: Original Mad Man” (2011) is a tagalong to the career of photographer Bert Stern in autumn, from his days as a magazine shooter to a chronicler of fashion and top-drawer maker of 1960s advertising in the days celebrated ever-so-doomily in Matthew Weiner’s “Mad Men” series. “Women and photography are the two things I loved most in the world,” Stern says of his days at Vogue. A fall from grace after an affair with meth led him to escape Manhattan for sunnier climes in Spain and further adventures in iconic images and lashings of lust. It’s far from hagiography, more like an unfocused, self-indulgent wiki-mentary. Trashing of the likes of Marilyn Monroe is the movie’s meat. And it only takes a few minutes of Stern’s acquaintance under the gaze of Laumeister, who first met him at the age of thirteen, and who brandishes the later, legal nude portraits of her, to actively loathe this now-eighty-three-year-old “bad boy” and unregenerate womanizer. Laumeister, forty years his junior, is no day in Central Park herself. The erratic sound mix is a further irritant. With Judith Crist, Jerry Della Femina, Larry Schiller, Twiggy. 89m. (Ray Pride)