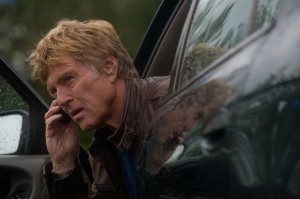 Among the small, canny, intelligent things to admire about Robert Redford’s “The Company You Keep” is the absence of a cast list in the opening credits: it’s the most sweetly starry supporting cast in any recent small-scale movie. (If you want the same eyes-wide surprise I got from the movie, I’ll just say it’s smart, engaging work before dropping names of the cast, which isn’t top-heavy, but just right, filled with nuanced bits of performance.) Okay, ready: Shia LaBeouf is a young journalist for the “Albany Sun-Times,” with a logo much like Chicago’s own Sun-Times. After the arrest of a radical still on the run from a 1960s murder (Susan Sarandon), he’s on the sniff for the big story, aided if not abetted by his skeptical editor, Stanley Tucci. Single fatherRobert Redford is a cautious lawyer who won’t take the case, for reasons relatively easy to surmise. (Sarandon has a strong, stirring jailhouse speech about whether there are circumstances in which she would act on her beliefs in such a way again that echoes key moments in the documentary, “The Weather Underground.”) Soon, both he and LaBeouf are on the run, encountering characters on both sides of the law played by Chris Cooper, Terrence Howard, Richard Jenkins, Sam Elliott, Stephen Root, Nick Nolte, Brendan Gleeson, Julie Christie and Brit Marling. LaBeouf is a little too ferrety and anxious—then again, that’s his specialty—but the other actors work small wonders with all they’re given in the script by Lem Dobbs (“The Limey,” “Kafka”) from a novel by Neil Gordon. Cliff Martinez, who’s composed many scores for Steven Soderbergh, as well as collaborating on “Drive” and “Spring Breakers,” contributes a gentle correlative to the acute, direct writing and Redford’s unhurried pacing. It’s a solid latterday bit of American film classicism, with vital observations alongside a measure of wish fulfillment. The clear-eyed cinematography is by Adriano Goldman (“City Of Men,” “360,” “Jane Eyre”)5m. Widescreen. (Ray Pride) “The Company You Keep” opens Friday at Landmark Century, CineArts Evanston and Northbrook Court. The trailer is below.