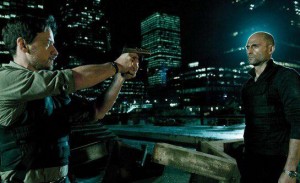 Conveniently opening the same week as Danny Boyle’s crime thriller “Trance,” starring James McAvoy, is music-video-director Eran Creevy’s second feature, “Welcome to the Punch” (2012), with McAvoy as a London detective caught up in a tumble of crime thriller clichés—revenge, nemeses, etc.—while in the company of a splendid supporting cast of Brits that includes Mark Strong, Andrea Riseborough, Peter Mullan, Jason Flemyng, Ruth Sheen and David Morrissey. Creevy displays a fondness for humorless macho posturing as well as a keen and loving acquaintance with the visual style of Michael Mann and John Woo. Narrative coherence is at a premium, although the action set-pieces are neat, simulacra of the work of any number of other filmmakers, clean renditions of what must have been an exemplary set of storyboards. A palette of deep greens and blues by night in East London’s Canary Wharf district demonstrates a great affection for fluorescent tubes, at once sleek and dingy. It’s no “Heat,” but there are moments of self-conscious cool as well as the occasional howler moment. Plus: London, a world-class film location, by night, looking almost as good as “The Dark Knight”‘s confected Chicago. A cheekily trashy, pumped-up electronic score by Harry Escott, whose work on the documentaries “The Arbor” and “The Battle For Barking” was superb, is a consistent source of amusement. Sir Ridley Scott is among the nineteen credited producers. 99m. (Ray Pride)

“Welcome To The Punch” opens Friday at Facets.