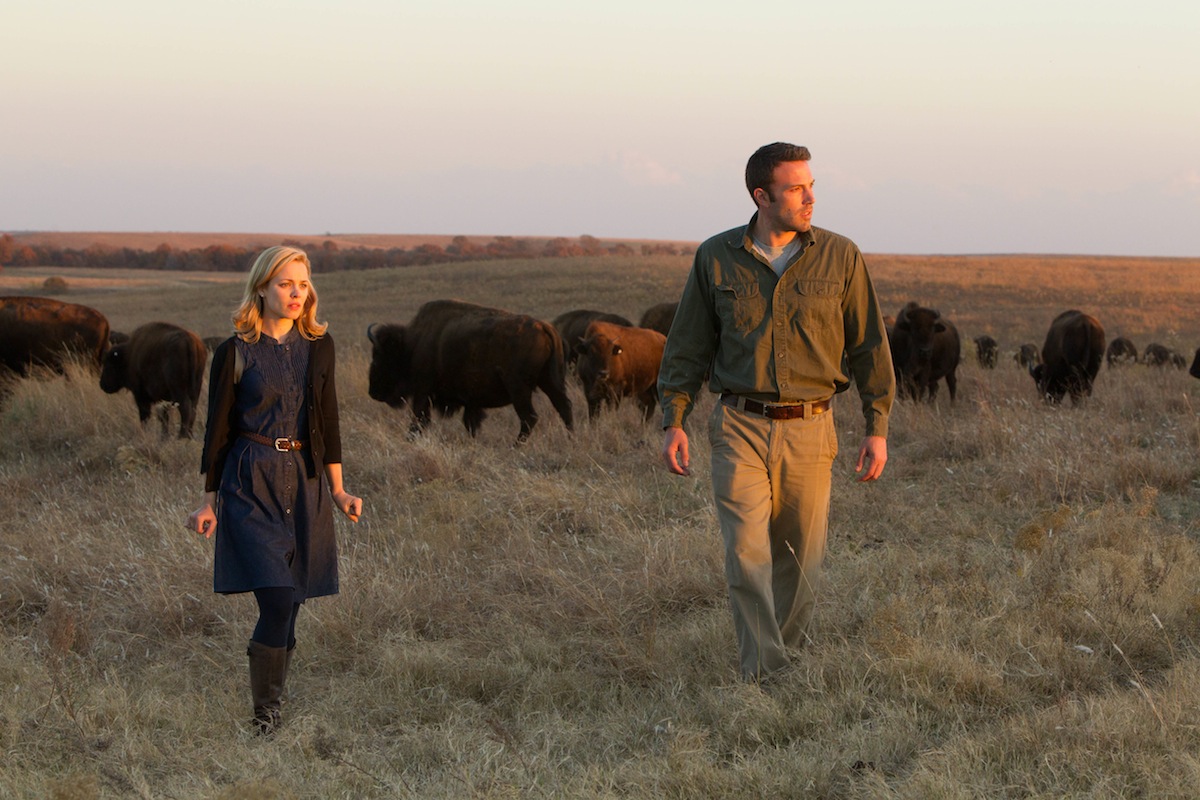 “To The Wonder” is immediately and insistently recognizable as a Terrence Malick film, and unrecognizable as any familiar fashion of storytelling. Its romance, between a cold man and two beautiful women, is told through implication and indirection, balletic camerawork, distinctive, layering pattering and rich images bursting with elemental pictorial beauty. Throughout, the camera not so much glides as it slides, puppy-dogs behind and beside the action. It’s 116 minutes of epic languor, with each individual shot charged with some sort of sharp shock. Malick works again with multiple narrations; one of the more memorably scraps of mutter is “an avalanche of tenderness.” More common are phrases that recall “The Tree of Life,” such as “I in you, you in me.” “To The Wonder” is a further distillation of Malick’s hope to convey emotion through implication, sensations, with thoughts as ululations of desire. Hushed and murmurous, “To The Wonder” dispenses largely with traditional story. While apparently steeped in autobiographical resonance for the suddenly prolific filmmaker—he reputedly has as many as five films in stages of editing as of this writing—some may disdain the film as a succession of bits of B-roll impressionism. Seeing the film a second time (in 35mm rather than DCP digital), it seemed as hard and sharp and precise as a diamond held lightly in a fist.

After a swoony rush through France, beaming at each other, standing at right angles to each other for the camera to swirl around them, laughing and walking on ice, Neil (Ben Affleck) takes his inamorata, Marina (Olga Kurylenko) from Paris to Oklahoma with her ten-year-old daughter and, later, during a split, runs into Jane (Rachel McAdams), a woman he knew from childhood. Neil is a kind of mud doctor, checking out the earth underneath, but also surface water and excavations, as he measures disturbances that construction and drilling have made in crust and muck and aquifer. Neil appears to be working in the aftermath of a calamitous occasion of hydraulic fracturing—Malick uses Affleck’s strong face as a smooth crag rather than for performance; he has few lines, none memorable. Marina is continually dancing and jumping, and there are hints of her aptitude with instruments and music and likely problems with depression. The first time I saw “Wonder,” Javier Bardem seemed in the margins as Father Quintana, a gloomy priest who ministers to the poor, broken, malformed and otherwise stricken, and offers advice like “A husband is to love his wife as Christ loved the church.” (That note doesn’t offer much help to Neil.) But Quintana does serve as a fulcrum between Neil and the two women: he speaks of the spirit and higher attainment while the man of the earth remains on rocky shoals in his personal life.

The expectedly gorgeous photography is in unfiltered natural light, flattering these three faces, especially McAdams. The film’s most tender moment, even aside from caresses in chaste nudity that are new to Malick, is between Neil and Jane. In a too-brief passage, Jane—who appears to be a horse rancher—she and Neil find themselves brushing against each other in a large field right up next to a herd of brown bison amid rustling grasses, as if grass were ever still when a camera, Malick’s camera, is directed its way.

The wind buffets her loose hair, they kiss, and a single, ready tear trembles on her cheek, matching the pearl earring. “I love you,” she whispers and all is good, before Malick is quickly back to God, wind, sun, murmuring. The longest bit of dialogue is in Italian, from a visiting friend of Marina’s, but Jane’s explanation of why her husband’s gone—”Student loans, gambling debts and this ranch that’s falling apart”—wryly tossed aside, is the closest Malick’s words come to the likes of “She was a good frien’ of mine. I hoped she would meet a charactah.” (That Malick was so long ago.) In its own way, “To The Wonder” is a silent film with sound design and never-ending musical undercurrent, only a few dozen words spoken on camera.

“To The Wonder” is also a very damp movie, filled with free association of wet, glinting imagery, akin to the sleek streets of Michael Mann’s movies, but omitting the streets and going straight to the source of life. While the film could be read as about pity and the hope of forgiveness, its heaviest impression is of rain, rains, raining, drains, streams and rainingness.

The Oklahoma suburbs, and the impoverished side of Bartlesville draws an Eggleston-like gaze, Malick and Emmanuel Lubezki’s eyes eager to describe oddities, passionate yet fleeting. (Steadicam operator Joerg Widmer’s work is, as in all of Malick’s recent films, intrinsic and indelible.) They’re drawn to cracked things, weathered siding, faces that are siding, even more weathered, as if a corrective from the way the camera gazes upon the faces of McAdams and Kurylenko and their bodies: they are ennobled. But beauty of one kind or another is everywhere: A half moon loiters above contrails above high-tension electrical transmission towers that align with rows of houses. Another contrail of luminescent white is like a gash off the blue enamel of the sky. Marina’s daughter exclaims in French in a supermarket, “It’s super-clean, everything is beautiful here,” continuing, “C’est incroyable!” Incredible, indelible: Malick wonders at the beauty of it all.

“To The Wonder” opens Friday at Landmark Century. The “featurette” below holds a fair scent of the texture and motion of the film.