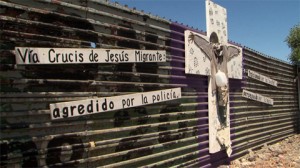 Effective agitprop bristling with clear-headed outrage, Peter Getzels and Eduardo López’s “Harvest of Empire: The Untold Story of Latinos in America” presents a punchy history of a seldom-explored basis for the so-called “immigration crisis,” of Latin American emigration after U.S. interventions, drawn from the research of journalist and Pacifica Radio contributor Juan González. As González has written, “We are all Americans of the new world, and our most dangerous enemies are not each other, but the great wall of ignorance between us.” Getzels and López’s approach is to cut through a wide swathe of information in a brief amount of time, which will engage many and swamp those who likely wouldn’t be interested in the subject in any case. With Rigoberta Menchú Tum, Jesse Jackson, ACLU’s Anthony Romero, Junot Díaz, Maria Hinojosa, Luis Enrique, Martín Espada, Geraldo Rivera. 90m. HDCAM. (Ray Pride)

“Harvest of Empire” opens Friday at Siskel. Juan González will appear after the Friday 8:15pm show. A trailer is below.

Harvest of Empire – Official Trailer from EVS Communications on Vimeo.