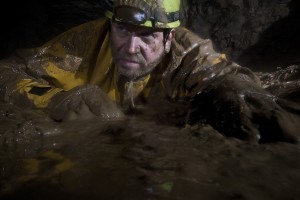 One of the least likely adventure movies of any given year, Janet Tobias’ “No Place On Earth” tells the story of 511 days spent by thirty-eight members of five Ukrainian Jewish families during World War II in sunless caves. Voiceovers, shadow-encrusted interviews and cloacal recreations take much of the potential snap out of the genuinely compelling tale of how the families survived in the seventy-seven miles of “Priest’s Grotto Cave.” Tobias keeps the movie dim and murky, only slightly less so than what the survivors withstood; the only truly bright light is the elder witnesses speaking of their efforts years later. 83m. (Ray Pride)

“No Place On Earth” opens Friday at Landmark Century.