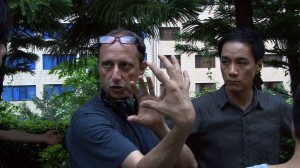 Gonzo is seldom the way to go in documentary, but there is a blithe prankishness and sweet-souled don’t-give-a-fuck to some, if not all, of Tanner King Barklow and Gil Kofman’s “Unmade in China,” which follows Kofman’s hiring to direct a cheap, slapdash thriller, in Chinese, in the Fujian city Xiamen, China and have it sanctioned by the strictures of local censorship. (The script for “Case Sensitive” was based on a famous Internet hoax.) Kofman doesn’t speak Chinese and says he doesn’t even like Chinese food. I don’t have a handy description to say what “Unmade in China” is on its own terms, following the stages of “unmaking” a movie the producers wanted an American director for, in name only, but it could handily wind up on a shelf that also holds “American Movie” and a good half-dozen other movies about movies about moviemakers falling on their face. Barklow has been a producer on Kirby Dick’s documentaries “Outrage” and “The Invisible War”; Kofman was a producer and editor on Dick and Amy Ziering Kofman’s “Derrida.” A best documentary winner at Sydney Underground, Edmonton International and the “Bloody Hero International Film Festival.” 90m. (Ray Pride)

“Unmade In China” opens Friday at Facets. The trailer is below.