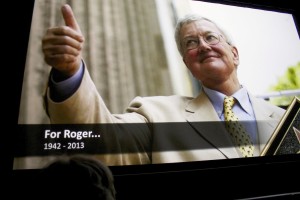 “Quality over quantity,” Roger Ebert wrote to me when he’d just signed onto Twitter, seeing how much I posted on any given day. But soon after, he was furnishing the Internet with his own personal, characteristic rivulet of riffs, reviews and retweets. His voice sounded in yet another form.

Last weekend, at the fifteenth annual Ebertfest in Champaign-Urbana, tributes were consistent in both quality and quantity. It was a living wake. But the programming, largely by his hand, served as a hyperarticulate last will and testament as well, the shape of which grew more and more emphatic as the five days and nights lengthened. The opening was a 35mm print of Terrence Malick’s “Days of Heaven,” with hearty ninety-two-year-old co-cinematographer Haskell Wexler in attendance. Five of the fourteen films were 35mm prints, another sort of wake, for the form he had always celebrated, in the format he first found it, bright and nourishing in the communal dark.

Wisps of Linda Manz’s voiceover took on new character. Did Roger know the chills moments in almost each of these films would evoke, or it is the simple fact of everything being viewed through his passing? “The farmer… He knew he was gonna die. He knew there was nothing there could be done. You only live on this earth once. And up to my opinion, as long as you’re around you should have it nice.” And of course Ebert’s last submitted review was of Malick’s “To The Wonder.” It is with these lines. “[H]e has attempted to reach more deeply… to reach beneath the surface, and find the soul in need.” Each seeming augury reminded that there is a reason we cannot live every moment through an awareness of our own passing. There are too many signs: all the signs.

Opening night was also fragrant with Midwestern tornado weather, skies grey as the flag in front of the university president’s house flew half-mast and whippy in hard wind. Thursday morning began with a thundercrack and skyful of rain. Chaz told the assembled, “I woke up this morning to the rain, and I said, ‘Roger, even the heavens are weeping.'” It was the most sentimental thing she said onstage, keeping to the simple and the stoic and the hopeful, hopeful about the power of friendship and crowds.

Addiction, forgiveness, loss, grief, the embrace by and the embrace of community: each film traveled rocky narrative terrain to arrive at the 1,200-seat Virginia Theater in the middle of downtown Champaign, Illinois. But it was safe harbor for movies, and moviegoers, such as Patrick Wang’s “In The Family”: separation, death, reunion. Tilda Swinton materialized for “Julia,” speaking of revolution and love and leading a communal “dance-along” through the aisles and across the stage, while Erick Zoncka’s film pitched and thrashed its alcoholic character who may find redemption in the film’s final gesture. Joachim Trier brought his second masterpiece, “Oslo 31 August,” a Möbius strip of one day of a too-aware addict’s life at the end of a Norwegian summer. James Ponsoldt’s precise, powerful, touching teen tale “Spectacular Now,” was not limited to the addiction of its central character, a boy-man who retreats from love, but bloomed with observation, compassion, hope.

The weekend before, I was at a dinner at the Sarasota Film Festival where custom holds that each table had to put forward one guest to offer a joke or a story or a toast. The round began with AC/DC’s Brian Johnson, reciting a filthy limerick, the odd chance and lilt of which would have made Roger laugh. I offered these words: “We take the moment and artists for granted. And this moment at this gathering is special, like all moments. I never expected Roger Ebert to go. I met him when I was nineteen and as a weekly reviewer in Chicago, saw him movie after movie for years and years until the end of his season. Once I toasted him with this toast: ‘To more time, in a time without limits.'” That eddied through the fourteen programs of Ebertfest: time, frozen, shared, lavished to an admiring crowd from beyond the beyond. Before “Days of Heaven,” young filmmaker Grace Wang, one of Ebert’s “far-flung correspondents,” showed her debut short. “I thought there was more time,” she said, regretting she didn’t thank him in the credits. “I sent him a photo of this absurdly small cassette [of my film], telling him, ‘This is a moment.’ And he wrote back just five words: ‘A moment for a lifetime.'”

Inside the Virginia, the 1,200 seats were filled for every show, all eyes were onscreen: no texting, no time-telling. Things were still happening in the outside world. West, Texas. Flooding in Chicago. Boston. At lunch and dinner, fingers on tablets and phones clicked like teletypes to get a faceful of the outside world. Quickly, gratefully, conversation turned back to movies, to Roger, to the future.

After Roger lost his speaking voice, the Eberts lived in a flurry of notes and Post-its, most of which Chaz discarded. She found one in her glasses case as she introduced a film—he had left her the “secret passwords” to his Facebook and Twitter. “Did he know something we didn’t know?” she said aloud.

The closing film, “Not Yet Begun To Fight,” attends to injured war veterans whose therapy involves fly-fishing in Montana streams. A grunting, self-identified “warrior” made mute by his injuries, describes who he was and who he became in precise and poetic terms, read by his computer in a synthesized voice like the one Ebert sometimes used. 2012’s closing attraction had been “Citizen Kane,” its soundtrack muted for two hours, as his practiced commentary sounded through the room, the last time his voice was heard there.

Movies: frozen in form, but malleable in memory, yes, time without limits. I can’t help but circle back to the last seconds of Malick’s film, with two girls on a graveled railroad grade, tracks curving beyond the horizon. The future’s up there, it’s also a stairway to heaven, Linda Manz murmurs, “I was hopin’ things would work out for her. She was a good friend of mine.”

Links to video of panels, tributes, introductions and Q&As are at ebertfest.com.