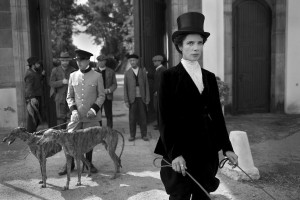 More loving, willful anachronism from Europe, Pablo Berger’s silent black-and-white fairytale “Blancanieves” (“Snow White”)—”a local film for a global market”—retells the familiar tale against the backdrop of bullfighting and flamenco in 1920s Seville, along with intermittent roosters and dwarfs. Berger writes of his fantasy, “By the end of the 1920s the language of cinema had been completely developed and great masterpieces had been created. ‘Blancanieves’ is not a copy but a reinterpretation of the films of that era for today’s audience.” Spain’s entry for the 2012 Best Foreign Language Oscar is sumptuously designed and pleasingly performed, and while amply, eagerly besting the whimsical “The Artist,” its psychosexual undercurrents play out as one more check-listed component of what might be described as authentic pastiche. Alfonso de Vilallonga’s score is vital to the effects, both melodramatic and comic. With Daniel Giménez Cacho, Maribel Verdú. 105m. (Ray Pride)

“Blancanieves” opens Friday at Landmark Century. A trailer is below.