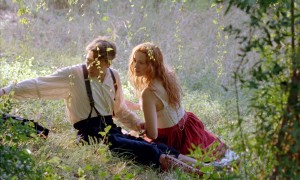 Gilles Bourdos’ period piece about the painter Jean-Auguste Renoir (Michel Bouquet ) in the late days of old age in 1915, relishing the light of the French Riviera, partakes of a bold mythos, providing the elder painter with a young female muse (Christa Théret) who also attracts Jean-Auguste’s son when he returns from World War I after being wounded. That son would be Jean Renoir (Vincent Rottiers), later the great filmmaker of “The Rules Of The Game” and “Grand Illusion.” The situation is charged, the pace perhaps unduly measured, but also of bold perfume, of an elevated lushness to make older members of whatever remains of a classical arthouse audience justifiably swoon. Bourdos doesn’t wring as much moment and momentousness as he should from the story, but it’s still a respectable featherweight, and certainly light years from a Renoir “Renoir” would have been. The true star and radiant intelligence of “Renoir” is cinematographer Mark Ping Bing Lee, a master of atmosphere. If you’ve seen “In The Mood For Love,” “Vertical Ray Of The Sun,” ” Goodbye, South, Goodbye” or “Norwegian Wood,” you will know what I mean. The score, naturally, is by Alexandre Desplat. With Vincent Rottiers, Thomas Doret, Romane Bohringer. 111m. (Ray Pride)