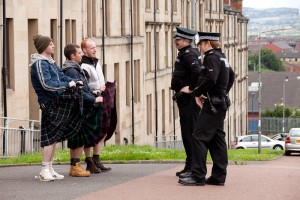 Whisky galore! The cheeky side of Ken Loach meets up with the picturesque side that loves Scotland for all its flaws to satisfying comic (and yes, political) effect in the comic caper “The Angels’ Share.” The rude sweary bits have co-existed with the now-seventy-six-year-old Loach’s revolutionary side for decades. Four working-class knuckleheads, including one determined not to return to crime—by name, Robbie, Rhino, Albert and Mo—are led on a merry chase from Glasgow to the Scottish Highlands by Robbie’s nose, which turns out to indicate a perfect taster’s palate for fine malt whiskys. Farce intervenes for the boys of the “Carntyne Malt Whisky Club” at welcome moments, especially as the film’s early passages are steeped in the horrifying frustration of permanent social immobility—despair, desperation, street violence. (Call it “Ocean’s Forty Proof.”) It’s the kind of bold mix that Loach and his customary screenwriter Paul Laverty excel at: serious and silly, socially aware and giddily profane, a stern warning that also leaves you smiling. The title comes from a distiller’s term of art, for the amount of whisky that evaporates each year from casks, and it makes for an alternately bittersweet and simply sweet metaphor for the film’s goings-on. It’s all nicely shot by up-and-coming cinematographer Robbie Ryan (“Fish Tank,” “Wuthering Heights,” “Ginger & Rosa”). Winner of the 2012 Cannes Film Festival Jury Prize. With Roger Allam, Paul Brannigan, James Casey, Roderick Cowie, Paul Donnelly. 106m. (Ray Pride)

“The Angels’ Share” opens Friday for two weeks at Siskel.