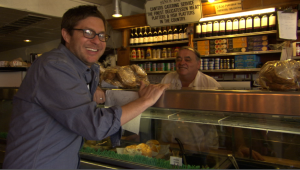 A Kickstarter-supported film that has nothing to with “Veronica Mars” or the mind of Zach Braff, Roberta Grossman’s pat, threadbare “Hava Nagila,” more suited to television than a bigger screen, is prototypical latter-day micro-budget moviemaking: an affable dip into a subject with the narrowest possible interest, in this case a long-forgotten 1950s pop-music novelty fad, entertaining to a pocketful of viewers who already have their own glancing relationship to the material or have a lasting fondness for dull kitsch. On screen, Harry Belafonte calls it “this Hebrew song of rejoicing,” continuing, “In song, I think, all humanity finds a place in which to reside where there is no fear. In song, there’s something that touches the best in the sensibility of the human family.” Who would disagree? Cue any number of gaggingly cutesy versions by inappropriate musicians. With Connie Francis, Leonard Nimoy, Glen Campbell, Regina Spektor, Danny Kaye and The Klezmatics. Narrated by Rusty Schwimmer. Visit the website for a “Hava Nice Day!” T-shirt. 73m. (Ray Pride)

“Hava Nagila” opens Friday at the Music Box and Northbrook Court. The trailer is below.