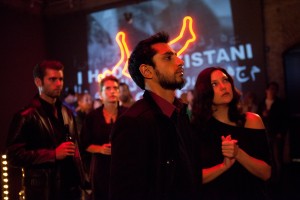 Mira Nair would make a fantastic fine arts photographer, and however ungainly her adaptations of novels like “Vanity Fair” or biographies like “Amelia,” I always eagerly await the coffee-table book that accompanies each film. (That would be “The Reluctant Fundamentalist: From Book to Film,” July 2013.) Working, as is her custom, with cinematographer Declan Quinn, “The Reluctant Fundamentalist” is never less than visually vital and sometimes luminously perfumed. Is the visual shimmer appropriate to this adaptation of Mohsin Hamid’s near-novella? Even if I could discern what part of the thriller or romance or travelogue this Indian director was attracted to make of the life of a Pakistani Muslim in the modern world, doubtful. What drives this man, what forces outside himself, within himself? Dunno. Are Wall Street machinations the equal of Jihadi violence? The script toys with the notion like a cat with a small, tired toy mouse. Riz Ahmed plays the Princeton-trained financial whiz-turned-fundamentalist after the events of 9/11, shown discreetly yet eddying ever outward. There’s less of the surface glitter of “Kama Sutra,” “Monsoon Wedding” and “Salaam Bombay!”, but she has a daunting magpie eye. I liked the moment-by-moment construction of her film of the coming-of-age story “The Namesake,” but “The Reluctant Fundamentalist” left me adrift. Each member of the cast shares their specific beauty with Nair’s camera: Kate Hudson, Om Puri, Martin Donovan, Shabana Azmi, Liev Schreiber and deliciously gruff Kiefer Sutherland. (The score is by Michael Andrews, with contributions from Amy Ray of the Indigo Girls and Peter Gabriel.) A production of the Doha Film Institute. 128m. (Ray Pride)