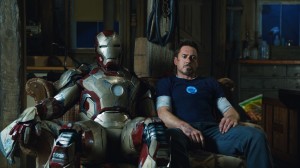 As “Iron Man Three” opens, superhero and ego fatigue seem ready to set in, with a brittle Robert Downey, Jr. and a little-is-too-much Gwyneth Paltrow, but it only takes a few short scenes for the movie to find its own footing. This is a Shane Black movie through-and-through, down to a reliance on one-on-one banter scenes rather than huge canvases and a Christmas setting (see: “Lethal Weapon,” “The Last Boy Scout,” “The Long Kiss Goodnight” and his 2006 directorial debut, “Kiss Kiss Bang Bang”). Sometimes, the one-on-one banter is even more micro, pingponging between Tony Stark and Tony Stark. For about an hour in the middle, “Iron Man Three” (as spelled out on screen) is a genial throwback to the 1990s wisecracking for which Black was highly compensated, especially in his exchanges with a Tennessee moppet who is slated to be a Future Industrialist Of America by his keen skills of observation and toe-to-toe verbal sparring with Downey. Titanic, incomprehensible action scenes set in darkness in industrial settings of no consequence eventually surface, more deadly than any monsters from the id. Until then, there are many measured pleasures within the lightly sketched caterwauling mayhem. Having Downey outside of the tin can for most of the movie is an improvement; having Jon Favreau’s character off-screen (for a good reason) is another. Downey’s understatement with the riffs in Black’s script (co-written with Drew Pearce) is sometimes little more than a mutter of interior monologue revealed; as Black told the Guardian in 2009, ” Real people in real situations don’t stop and wait for their gags to be registered and applauded. They just chuck them out as they go along.” (The superfluous line “I just stole a poncho from a wooden Indian” works because of the damped wonder in Downey’s delivery.) But even the smallest corners of the frame pop with details (including the usual roster of product placement), including a local newspaper that resembles a penny shopper but bears the slogan, “Your Life Since 1883.” Guy Pearce makes a sly adversary, even while embodying the film’s most outrageous transformations, including the baring of his own meaty torso. Invocations of real life violence will either ground the fantasy or crash it to earth, depending on your worldview: the shadows left by vaporized figures as at Nagasaki and Hiroshima become a major plot point, and terrorism in public places is shown. (“It’s not politics,” Stark says, making it political, “It’s just good, old-fashioned revenge.”) Yet there is brute skepticism about the creation and sustenance of bogeymen, which yields the movie’s strangest, most unlikely passage, which I will only describe as a scene from a never-made Beatles movie involving a man called Trevor, “Trevor Slattery.” It’s only one of several whip-smart, careening plot twists of sometimes gratifying intelligence. Ben Kingsley is on hand as a figurehead of international terrorism called “The Mandarin,” patterned after Osama bin Laden by way of Hollywood mustache-twirling and with strange verbal cadences that suggest George W. Bush with a few extra marbles in his mouth. A “Zabriskie Point”-style interlude, with the sustained detonation of Tony Stark’s Xanadu is missing only product placement, missing the trick of having detonated Audis and Sun Oracle Exadata servers and Bud Lights and Calumet Indian baking powder rushing over our heads in 3D. With Rebecca Hall, Don Cheadle, Jon Favreau, Miguel Ferrer, Ben Kingsley. 129m. Widescreen. (Ray Pride)