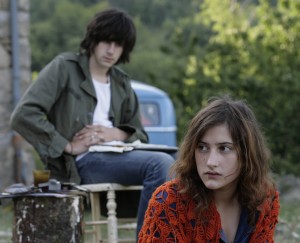 Olivier Assayas’ marvelous meander of a memory piece, “Something In The Air (Après mai)” is a tactile collection of impressions, with the movie itself finely situated in France, 1971, but also in the world of Gilles, seventeen-year-old high-school student intent on becoming a painter, and who follows a path very similar to the one the filmmaker took to his storytelling career.

Dreamily paced, serenely elliptical and seldom less than beautiful, the fifty-eight-year-old writer-director’s film looks back at his own coming to awareness, but also engages in a serious conversation with the late work of French master Robert Bresson, including his “L’argent,” “Four Nights of a Dreamer” and especially, “The Devil, Probably.” There is an implacable, concrete beauty to those films, where objects and colors and young faces, especially young male faces, are presented as mute forces of manmade nature. (The ending of the film, however, impresses a female face onto the protagonist and the filmgoer alike: a fantastic, phosphorescent image in a film about a film that loses its boundaries and becomes the film itself, pointing Gilles emphatically toward his vocation.)

In a conversation we had at the 2012 Toronto Film Festival, Assayas agrees. “I don’t film like Bresson, but I think I learned about filmmaking from watching Bresson. I learned from watching the films of Fritz Lang trying to understand how films are made, and Bresson was the master, but not exactly someone I copied when I started making films.”

On a big screen, a Bresson film like 1959’s “Pickpocket” still startles with how sensual it is, freighted with sex and possibilities, not at all the reductionist stereotype of austere religious belief— “Oh no!” Assayas says, leaning toward me, not missing a beat in his fast, fluent English. “Absolutely not! To me, Bresson is the most sensual, the most intense, the most deeply narrative of filmmakers. He is all about concision. I believe in concision, I believe in precision, but most of all, it’s not that he believes, it’s that he knows about the presence of invisible, the invisible in cinema, and it is exactly what you are describing, the fact that the way that you look at a face, the details in a film, they all have the potential to evoke things, they are like poetic elements, they are correspondence between these colors, these moods, that somehow take you elsewhere. The viewer is constantly processing all of that. And I think it is a texture that few filmmakers know how to use. I believe in the power of objects, of colors and so on, but then I don’t want to be too felicitous in filming. Because when I am filming I just need the likeness, the spontaneity, the degree of the improvisation, being about to reinvent the shot and so on and so forth. But I know that I am constantly dealing with things I see and things I don’t see, and that if I get it right, every single image will have a broader, longer echo within the viewer.” (“Reality knocks on my door, and I don’t open” is one of taciturn Gilles’ few epigrammatic outbursts.)

The use of color, especially in the costume design, is an abstraction in a way, but it is yet very precise. But the screenplay resists traditional narrative. “I did not want to dramatize this film, and I did not want it to be sentimental. In many ways, I have made a dramatic version of this story. But I just wanted to strip the artificial elements and go back to the actual moments and capture the feeling of the time, capturing the reality of it, and the reality of youth. It has to do with being very careful, in terms of not creating artificial tension—you know you can always be cute or romantic or this and that about youth. I think you can capture the actual romanticism of youth if you do it extremely quietly, and in the most understated way. Which of course made my life very difficult with the screenplay especially when we were financing the film. This film obviously has a lot of financiers, and even in Europe, the first reaction was ‘What! There is no story… nothing happens!’ But, yes, somehow that is the whole point. It’s what the film is about. If I was just using tricks to make it exciting or this and that it would just completely destroy what ever I was trying to do.

“The reason I chose Clément Métayer to play Gilles was because there was still some childhood left in him. There is something still naive and completely unfinished about him, and that’s how I remember myself at the time. And that is how I felt at the time, I was incredibly mature about a few things, but also extremely insecure about these other things, I had this wide-eyed vision of the world I did not fully grasp. And I think that because they are all so very young I had to be careful, so with the ages, because ultimately … When you are casting and meeting a lot of kids there is a whole difference between a seventeen-year-old and a nineteen-year-old. At nineteen you are grown-up, you’re different; seventeen, you are still a kid. And Clément? I just needed that kind of naiveté that he had.”

“Something In The Air” opens Friday at the Music Box.