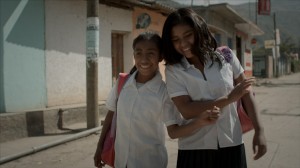 Antonio Méndez Esparza’s “Here and There” (Aquí y Allá) is a fine heart-crusher, a contemplative story of home and hope that etches the fate of an immigrant worker who returns from “There”—the never-seen United States—to his hometown of Guerrero, Mexico to find his family changed beyond his imagination. As writer and director, the thirty-six-year-old Esparza’s delicacy bears quiet grace, as political in its accruing details as any dozen hectoring parables would be. Worthy comparisons have been made to the films of his countryman Carlos Reygadas: The lighting by day and night is rich as well, lending an impassive beauty to the fates that quickly ensnare and befall the characters. Never rustic, the film’s calm also parallels the poet of the Thai hinterlands, Apichatpong Weerasethakul. An official selection of the 2012 New York Film Festival, as well as Cannes 2012’s Critics’ Week winner. 110m. (Ray Pride)

“Here And There (Aquí y Allá)” opens Friday at Facets. A trailer is below.