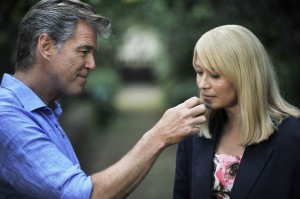 Known for high-minded melodramas (“After the Wedding,” “Brothers,” “In a Better World,” “Things We Lost in the Fire”), Susanne Bier comes down to earth with the less ambitious “Love is All You Need.” A wedding at a rustic villa by a lemon grove on the Amalfi Coast is the main locale for a comic and romantic affair that recalls “Freud Leaving Home,” her 1991 debut, set during a family birthday gathering. A mother with an inoperable brain tumor is replaced with a mother-of-the bride undergoing chemo for breast cancer. A gay son figures in both plots. Instead of locating most of the drama in Scandinavia–with storylines citing Afghanistan, England, India, Israel, Kenya and the U.S.– Bier and longtime writing partner Anders Thomas Jensen match sweet hairdresser Ida (Trine Dyrholm), married to a cheating lunk, and sour exec Philip (Pierce Brosnan), a widower whose picturesque property is the wedding destination. Ida’s daughter and Phillip’s son met only three months ago and most of the film occurs in the three-day run-up to the nuptials, which is three months prior to Ida’s next scheduled check-up with her oncologist. Lapses in craft include a meet-cute by minor collision in an airport parking garage that is followed much later by one driver relating a fatality caused by a similar accident, lacking any detectable cuteness. Continuity errors include a brother-of-the-bride going from a military buzz cut to two inches of hair in two days, and their skinny-dipping mother with no trace of the mastectomy discussed two days earlier (options for “breast reconstruction” of the “one missing”). An allegory, the kind typically imported by a nature documentary playing on a TV, goes nowhere when Philip instructs Ida about a citrus parasite. Males have no mouths and die out. “His life is absolutely without meaning,” he explains. As for asexually reproducing females: “They’re a very odd creature. Very annoying and very dangerous.” Far worse than the birds chirping the same notes in Denmark and Italy are the unforgivable, unending versions of “That’s Amore” on the white-cake soundtrack. With Molly Blixt Egelind, Sebastian Jessen, Paprika Steen, Kim Bodnia, Christiane Schaumburg-Müller. 110m. (Bill Stamets)

“Love Is All You Need” opens Friday at Landmark Century.