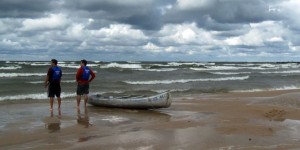 Robert Cicchini’s “Waterwalk,” based on a memoir by Steven Faulkner, is an uplifter following a canoe trek made by a newly fired newspaperman and his adopted Korean teenage son, tracing the route taken by explorers Marquette and Joliet from Michigan’s Upper Peninsula to St. Louis in 1673. Spoiler: the latter-day duo doesn’t agree on much. “Waterwalk” is yet another entry in the burgeoning twenty-first-century American tradition of soothing, reassuring, earnest, oh-so-small micro-movies that capture a moment in less-traveled, often verdant reaches of the land. Be prepared for phone conversations in lieu of drama and flat, unnuanced lighting, especially in undernourished interior scenes. With Cicchini, Chase Maser, Mary MacDonald Kerr, Richard Riehel. 121m. DCP video. (Ray Pride)

“Waterwalk” plays Saturday and Sunday at Siskel. The trailer is below.