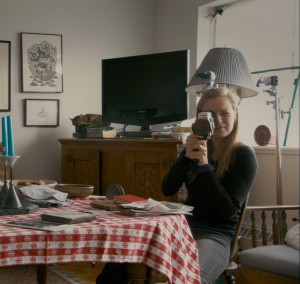 Sarah Polley’s third feature, the nonfiction “Stories We Tell,” is a tricky thing, one that does not stop reflecting and refracting until its very final frames.

It’s exceptionally fine, smudging the boundaries of what many consider to be documentary practice, and almost impossible to describe without tarnishing the unalloyed joy of the discoveries it offers the viewer. Starting with her third short, the thirty-eight-minute “I Shout Love” (2001), Polley was readily identifiable as a talented filmmaker, one whose intelligence was not limited to distinctive performances in movies like Atom Egoyan’s “The Sweet Hereafter” (1997) or “Guinevere” (1999). And then her Oscar-nominated “Away From Her” (2006) and “Take This Waltz” (2012) marked her as an idiosyncratic, compelling writer-director, even as you realize each of her films, to date, have dealt with the limits of long-term relationships. In “I Shout Love,” a mismatched Toronto couple can’t part, because of their shared love for the Leafs; “Away From Her” observes a man letting his Alzheimer’s-stricken wife find a new life, apart; and the bracing awkwardness of her female protagonist in “Take This Waltz,” watching her wreck a marriage, and more, out of headstrong willfulness.

And now, “Stories We Tell,” documenting how the lives in Polley’s own extended family changed after a search for details about her late mother’s life kept revealing detail after detail that had been part of the family’s unspoken history. I talked to Polley at Sundance 2013 about the film, yet there wasn’t much to talk about that can be, well, talked about. Polley has close professional relationships with other filmmakers she’s worked with, including Egoyan, Isabel Coixet, David Cronenberg and Wim Wenders, and the extended, multi-year process of making “Stories We Tell” drew on any number of mentoring programs and advice from storied colleagues, beginning with a relatively small grant in 2008 from Canada’s National Film Board that eventually led to the beguiling result on screen.

“I think it’s a universal thing in every family, that people have their own specific versions of pivotal events or even small memories,” Polley has said. “They are 100 percent certain that their recollections are the truth because whatever the truth is, as they recall it, has formed them and it is part of their history. Discrepancies in memory preoccupy families, and the idea of this fascinated me.”

Her mother, Diane, died when Polley was still small, and the now-thirty-four-year-old filmmaker was curious about her life as an actress, a mother to three children, and as a free-spirited woman. Within the film, the poetry-steeped director quotes Neruda: “Love is so short, Forgetting is so long.” An act of recovering memories rather than bearing witness, “Stories We Tell” also draws on a wealth of Super 8 footage, the depth of which and alacrity with which Polley edits it, both impresses and amazes.

But the film’s consistent look belies its patchwork of interviews, narration shown as it is recorded in a sound studio, as well as the Super-8 footage. “That’s all my cinematographer Iris Ng, who is so fucking rigorous about this. It was insanity! She was poring through every shot; she tested a hundred Super 8 cameras, every kind of stock. Which is kind of scary, and crazy, ‘cos getting your dailies back on Super 8? An entire production? Everybody who processes on Super 8 is high, that’s what we learned. There’s no one who’s processing Super 8 for a living who isn’t on pot, smoking a lot of pot. So basically you’re getting your dailies back every day and going, ‘Oh god, please! Tell me it was just a break between inhaling. No. There is nobody in the world that processes Super 8 right now who is not smoking a lot of pot. They’re brilliant. And they’re great at what they do. They’re just not necessarily going to be the fastest!”

Unfortunately, it’s hard to be as rigorous about withholding the film’s details. “It’s impossible,” Polley agrees. “Yeah, yeah. It’s a film that would really benefit from people seeing it cold without knowing anything about it, but that’s impossible. In a way, I’m sort of surrendering a little bit to that [while] trying to keep certain things like the [deleted] secret, that’s a nice twist for some people. At the time we were putting the film together, we thought people would have figured out [certain scenes worked a certain way] much sooner.”

“I learned so much,” she says. “I feel like I also spent that four years watching every documentary I could get my hands on! I just loved immersing myself in a medium I had no experience in, and one that I loved so much. It ended up being a really, really rewarding experience. As much as it was difficult to make, I don’t know if I’ve ever felt as happy, and as rewarded, when I finished something. I feel I gave my entire self to making this film, and I had to be rigorous in a way that I didn’t have to be in my other films.”

But that consistent theme of long-term relationships is always there. “Yeahhh. I know. You know, I have lots of other ideas for films, that don’t have anything to do with this stuff, I just don’t end up making them. I do think there’s something strong, and subconscious for any filmmaker or writer, where you keep treading similar ground, and I don’t think you don’t really know why. In this case, it’s kind of strange, because I think in making this film, made me realize a little bit about why I kept returning to these themes? And how it was deep and personal for me. Now that I’ve made the film it’s really about, I sort of wonder if that theme will have the same hold on me in the future, if I’ll make very different kinds of films.”

“Stories We Tell” opens Friday at Landmark Century. Below: Polley answers a question at the premiere of the film at Toronto International 2012; and the trailer.