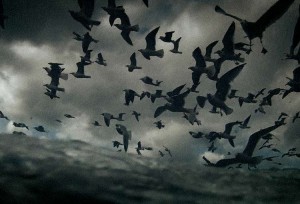 A fierce fish tale from POV of fish and sea. Plus: Clank. Groannn. Caw-caw-cawwwwww. Rrrra— Pop. Shreeeeeee! Splurp. Ammmg. R r r rrrr— “Sweetgrass” filmmakers Lucien Castaing-Taylor and Véréna Paravel of the Sensory Ethnography Lab at Harvard University further their immersive excursions with the singular nonfiction artifact, “Leviathan,” aka “Heavy Metal Fishing Ship.” Off New Bedford, Massachusetts, once whaling capital of the world, they seek the secrets of the sea within and without the confines of one trawler among hundreds of weeks-long travails to harvest the riches of the ocean. There’s terror within the fishbelly of the beast, clamoring at work, and beneath the waves and in gull-serrated sky. Tiny GoPro cameras were liberally distributed around the ship, many times without a guiding human hand (or eye), scurrying through the moment’s catch like one more creature from below. Blur and smear and digital noise are the virtuosic working vocabulary. Groaning, granular, eruptive, explosive, sometimes hardly legible as image. The interminable havoc we hear is not sound design so much as noise design: Jacob Ribicoff and Ernst Karel’s work is as kaleidoscopic, if more grating, than the imagery. Even the incessant wetness is infernal in its own fashion. Shot largely at night, often literally from bird’s-eye or fish-eye view, there is vibrant energy at once deadly and lifegiving. Even the humans seen are observed in eccentric fashion, as otherworldly as the guttering of purest red off the side of the ship into a post-sunset sea, more susurrus than bloody waterfall; cascades of gutted tissue that glide from side to side with ship’s sway; starfish racketing through underwater churn as they tumble from their barnacled place on the hull; or the camera’s dive beneath water’s surface and up again while trained on a patterning screech of seagulls, alternating diamond forms like Escher, live, alive, in cacophonous motion. All is disorientation, the fathoms near-unfathomable. The sea, insurgent, battles the gathering and the machine that man made groans forward. The end credits alternate humans with marine species and a final card in the near-illegible heavy metal-font end credits hits this note: “Sacred to the memory of California, Hilda Garston, Josephine Marie, Marie. E O’Hara, Miss Sonya, Nita. T,  Northern Voyager, Sankaty Head, Wanderer, Whyda and countless other vessels lost at sea off the New Bedford coast.” The great, impressionistic filmmaker Claire Denis is among those thanked. 87m. (Ray Pride) “Leviathan” opens Friday at Siskel. The trailer below gives a fair sense of the film’s intense sensory immersion.