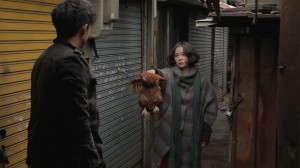 Savage if not entirely graceful, South Korean filmmaker Kim Ki-Duk’s eighteenth feature (which he proudly denotes in the opening credits), the violent yet minimalist “Pietà” tracks the actions of a pitiless loan shark after the appearance of a woman who claims to be the mother he didn’t know he still had. Grisly, self-pitying and violent in both act and implication, it’s recognizably the work of South Korea’s leading rube provocateur, whose earlier, equally absurd films include  “The Isle” (2000), “Bad Guy” (2001), “Time” (2006), and “3-Iron” (2004), most of which star sexually unpleasant, self-centered, violent men. As disturbing to recall as to watch—dare I even invoke the phrase “vaginal fisting”? Or mention the cannibalistic self-sushi scene? — “Pietà” seems as much poker-faced self-parody as a real-life motion picture. Oh: and rape. Rape even if Kim’s lead turns out not to be a real-life “motherfucker.” Winner of the 2012 Golden Lion at the Venice Film Festival. 104m. (Ray Pride)

“Pietà” opens Friday at Facets. The U. S. trailer is below.