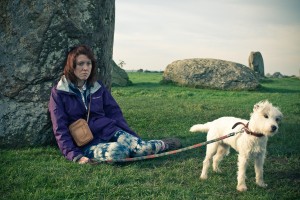 Homicidal rage be thy name! Recently arrived seer of Brit batshittery, writer-director Ben Wheatley, has a near-unrivaled knack for bile and giddy guile, put to full test in the tragicomic eye-opener, “Sightseers,” a story of a couple that thinks they’re going on a kitsch tour of the English countryside but instead go native in the goriest possible way when faced with the motley, petty grievances of modern life. (Think Mike Leigh with a body count, or, “Natural Born Campers”). Their hair-trigger reactions are priceless, and needless to say, bloody deadly. “Sightseers” is a kindred sister to Bobcat Goldthwait’s “God Bless America” in its embrace of tactical comic homicide. There’s not much overt critique of the British class system here, but an awful lot is suggested, and a mean spirit reigns. (The characters are as tacky as the film’s cover version of  “Tainted Love.”) I think there’s a chance I shouldn’t be as impressed with Wheatley’s dark “Down Terrace” (2009) and darker “Kill List” (2011), or be as filled with anticipation as I am for his forthcoming “A Field in England,” a story of soldiers in the English Civil War who are captured by an alchemist and led down a hallucinogenic path. There’s something so wrong it’s right in all three of his movies so far, and they are not for the faint of heart. There’s no place like home, and no fate like homicide. With Alice Lowe and Steve Oram, who developed the characters and wrote the script, and Eileen Davies (a favorite of Mike Leigh’s), Roger Michael, Tony Way. 89m. (Ray Pride)

“Sightseers” opens Friday at the Music Box.  A trailer is below.