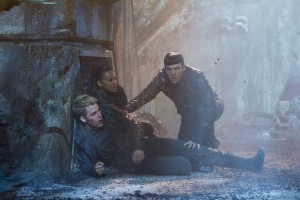 It took a couple of days and an errant first draft after seeing “Star Trek Into Darkness” to realize that what I found most galling at first is in fact thrilling, glorious subversion by allegory. Sure, JJ Abrams liberally imposes his goofball digitally created lens flares; his action scenes aren’t exceptional at spatial coherence; and the reign of male-pattern bathos is interspersed with comic callbacks to touchstones from nearly fifty years of “canon” derived from Gene Roddenberry’s stories, as well as four television series and eleven feature films. There are bright colors, a camera style of no fixed address, and a pace that moment-to-moment is “fun,” aided immeasurably by a lovingly manic score by Michael Giacchino (“Alias,” “LOST,” “The Incredibles,” “Ratatouille,” “Up,” “Super 8,” “Star Trek”), capable of striking notes that range from fear to giddiness in the same passage and always capable of being bigger than the biggest CGI explosions aloud in space, but never bigger than the love that Spock has for Man, I mean, Jim. And of course for anyone versed in the fabric of story already woven through the decades, there are many callbacks, asides and premonitions of what is to come for these beloved characters. (Plot details follow.) It’s also an eccentric variation on 1982’s “Star Trek: The Wrath of Khan” (directed by Nicholas Meyer with a screenplay credited to Roddenberry, Harve Bennett and Jack B. Sowards). Within the tortured jags and zigs of the turn-laden plot in all its slash-fiction-fanfic finery, there’s room for an opening that draws on “Raiders of the Lost Ark,” a shuttlecraft that mimics the evasive maneuvers of a certain Millennium Falcon, and echoes of 9/11 that at first seem as sour as “Cloverfield.” Kirk’s in violation of the Federation’s vaunted “Prime Directive” from the opening moments in media res and continues throughout. (The Directive forbids interference in alien cultures and civilizations.) I’ve seen the Prime Directive, sir, and this is no Prime Directive, this is the U.S. Constitution. In a script credited to Roberto Orci, Alex Kurtzman and Damon Lindelof, the Federation is led to commit acts its founders never dreamt? Why does Kirk readily, hotheadedly discard all he’s been taught about freedom and ideals? Young Jim Kirk sees forward only to Mission Accomplished. Drones are to be preemptively deployed against supposed enemies. Due process is tossed aside. A tall, secretive terrorist hides in a distant cave far across the universe? A Star Fleet Admiral starts a war against figures that had nothing to do with a terrorist attack at hand? And once you discover the saturnine banality the pale Eminence behind that admiral, played by Peter Weller, the tumblers fall into place with a mighty click. Iraq. Afghanistan. Dick Cheney. Hubris. Failure. Guaranteed failure. Predictable, predestined failure. There’s a too-familiar line from Shakespeare’s “Julius Caesar”:  “The fault, dear Brutus, lies not in our stars, but in ourselves.” The movie is set in 2259, but their present is our present: it remains Dick Cheney’s world, after all, and “Star Trek: Into Darkness” just lives in it. The 9/11-style attack on London at the film’s beginning is followed by backstory upon cover story and bright rhetoric soars and false flags are planted alongside other false flags. They darkly wave. Political opportunity is not wasted on ready opportunists. The parallels hold and one of the film’s first closing cards, “THIS FILM IS DEDICATED TO OUR POST-9/11 VETERANS WITH GRATITUDE FOR THEIR INSPIRED SERVICE ABROAD AND CONTINUED LEADERSHIP AT HOME” no longer offends, but is in fact a sincere, bold brandishing of the hidden-in-plain-sight parable about our post-9/11 times. It’s not topical overlay: this is the damning heartbeat of the screenplay by Orci, Kurtzman and Lindelof. With Benedict Cumberbatch, Chris Pine, Zachary Quinto, Karl Urban, Simon Pegg, Zoe Saldana, John Cho, Anton Yelchin, Bruce Greenwood and a brief mind-twister of a cameo. 132m. Widescreen. (Ray Pride)

“Star Trek: Into Darkness” is now playing in largely superfluous 3D, and in some locations, the pounding and zooming of the recently introduced Dolby ATMOS sound system.