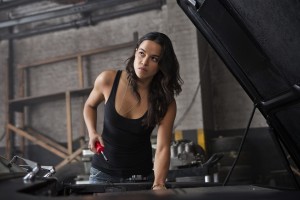 “Furious 6,” as the main title has it, has the same simian delight as “Fast Five” and prior installments of the series: friends become family, bond in crime, regroup when one of many is in a fresh scrape. As more and more reviewers have realized, as audiences did almost straightaway, this series is seriously “post-racial.” It doesn’t matter “what” anyone is: action speaks louder than one-liners. Everyone’s a colleague, a peer, a friend. “We’re family, we do things together, you’re stronger together, ya always were,” is only the first iteration of the endless, kindly affirmations. Jibes are familiar now, basic unadorned teasing, terse bunkum. Vin Diesel makes gravel audible—there’s one reason he didn’t choose “Vin Cashmere” as his nom de zoom—with elongated, not quite drawled delivery of lines like “L’es go for a li’l ride.” Women bare their backs, the men their torsos: when Diesel wakes with his latest love, we’re treated to a glimpse of his kneaded-dough belly button, its furrows as profuse and detailed as the frown lines between his eyes. There are special effects in profusion, with physics-defying stunts that grow increasingly delirious. Few pop from the screen as brightly as Michelle Rodriguez’s magnetic smile. (Or her de rigeur black tank top.) Added to the extensive roster is “Haywire”’s Gina Carano as a glum Fed: no, she cannot act. She can’t even hold her face convincingly. (Kinetic vs. Magnetic: Carano vs. Rodriguez.)  The rest of the cast—including but not limited to The Rock, Paul Walker, Jordana Brewster, Tyrese Gibson, Chris Bridges, Sung Kang and Gal Gadot—have mastered the gesture of making the slightest motion with a single eye, just shy of a wink. There are more reaction shots in this movie than in one filled with puppies. The plotting is desultory, and the story’s ticking clock is quickly thrown out the window. Here’s some more downshifting, here’s a quick flash of party girls, oh, here’s most near-whispered intimations of lifelong bonds between friends. When the bad guy offers up his steaming, cynical mouthful of conspiratorial meanness, there’s no way he can win. The puppies win every time. “Just because you know how I live doesn’t mean you know who I am.” Yep. The expected post-credits sequence not only is a true action scene, it’s also one of the strangest what-the-fucks in a film season piling up with them: half the audience cheered, the other shared my reaction. What. The. Fuck. Production designer Jan Roelfs’ credits include “Orlando,” “Gattaca” and “The Cook, The Thief, His Wife and Her Lover”: fantastically detailed grime is his stock-in-trade here, proposing a back-streets London that runs on grease and grime, enough to fuel the supercharged vehicles that outrun the world-beating terrorist plot. At one evening Chicago press preview, the film began without sound, and emboldened by one viewer, the crowd joined in with mouth sounds of careening and downshifting and barreling away, suiting the plainly positive vibe these films have left behind under Justin Lin’s gravity-defying hand. 130m. Widescreen. (Ray Pride)

To paraphrase a departed Chicago movie reviewer, “Vroom-vroom! Gentlemen, Friday is the time to start your engines for ‘Fast & Furious 6.'”