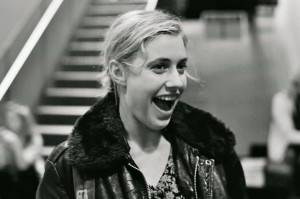 A romantic comedy without kisses, Noah Baumbach’s “Frances Ha” (co-written with Greta Gerwig) is a vest-pocket “Manhattan,” a monochrome charmer about the mistakes a young striver makes at the elder age of twenty-seven, before her true, adult life begins, sometime shortly after the film’s “a-ha” of a final shot that illuminates the cryptic title. (And announces that all we have seen before is mere comic prelude.) Frances is getting past the proper time to be the dancer she intends to be, and the film neatly choreographs her progress toward her true and proper profession. But that’s not to say Frances, and Gerwig by extension, isn’t a creature of physicality. Gerwig’s her own Mabel Normand to her inner Mack Sennett: there’s good and proper slapstick throughout and she’s electric throughout. Her Frances is self-consciously unselfconscious: a serious person inside a still-young shape. Shooting in restrained black-and-white, and drawing from scores by 1960s Georges Delerue themes from movies like “King of Hearts,” “Promise at Dawn” and “Contempt,” “Frances Ha” is post-nouvelle vague but in the richest possible cinephilic manner. Influence and citation are there, if you want it, if you see it, but it only enriches the portrait of this young woman whose trials in forbidding, pricey New York City draw her closer to the woman she will be, the artist she will be, the character she will become. Gerwig draws upon her well of previously demonstrated charisma, her ample capacity for twerpitude refined, honed, elevated: what she does so well with the material given in “Damsels In Distress” is a dozen-fold more compelling in the hands of Baumbach and herself. The dialogue is quippy but genially barbed and seldom less than telling: the eccentric insult “You judge people who aren’t as moderate as you” tells more than Frances could ever know. As her roommate and best friend from college, Sophie, Mickey Sumner is somnolent but coiled, snappish but attentive, precisely sour. She makes Sophie an ideal counterpoint to the innately dorky Frances, bristling if not precisely hostile to her friend’s teeming Frances-ness. There are men, too, foils and acolytes but none of them the motor of the movie or her prepossessed life. The jokes are plentiful, observant, irreverent, nonsensical and common sense, and Gerwig bursts out in flights of “Fuck!” as well as anyone working today. “Frances Ha” is a seriously funny movie. Typical of its bustling bursts of setpieces, the film takes a fantastic leap in a scene following Frances running at top gait, leaping as the dancer that she is, through nighttime Chinatown streets, the laterally tracking camera fixing her as a succession of twenty-first-century Muybridge framings in motion, accompanied by David Bowie’s “Modern Love”—a thrill redoubled for those who have seen “Mauvais Sang (Bad Blood)” as well as “Boy Meets Girl,” Leos Carax’s black-and-white debut, also a short, bittersweet black-and-white song of apartments and city streets. Her energy, the character’s headlong tumult, the clatter-bang instrumentation of the highly genial song: it’s precious, even. You laugh, you gasp, you love. With Adam Driver, Grace Gummer, Michael Zegen, Josh Hamiltion, Britta Phillips, Dean Wareham. 86m. (Ray Pride)

“Frances Ha” opens Friday at Landmark Century. A brief scene from the film is below, showing Sumner and Gerwig both in fine, terse form.