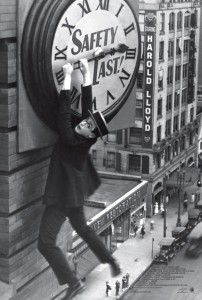 “1923’s comedy smash hit is shiny and new for 2013!” Ah, they sure don’t advertise movies like they used to. In Harold Lloyd’s “Safety Last,” directed by Fred Newmeyer and Sam Taylor, his eager rube moves from the small town of Great Falls to the big city. Then-standard bits of sentiment are passed over quickly enough on a trajectory toward the central scene of a multi-story climb up the side of a Los Angeles building that made “Safety Last” legendary. The heedless traffic on the streets stories below only adds to the jaw-dropping spectacle. The fancy vehicles and streetcars and city streets and storefronts are an eyeful even before the cleanly executed setpieces and sight gags are embedded into the frame. There’s a life-endangering élan and run-for-it spirit in all of Lloyd’s inventions, and the best place to see it is in a big, packed theater. (Lloyd made over 200 movies and, as Janus Films’ press notes point out, his films made more money than Keaton and Chaplin put together.) This is a new DCP digital restoration made from the original nitrate camera negative. It looks swell, darn tootin’. With Mildred Davis, Bill Strother, Noah Young, Westcott B. Clarke. 67m. (Ray Pride)

“Safety Last” plays Friday-Monday at the Music Box. Live accompaniment by Dennis Scott only at the 6:30pm show Saturday, which includes other music and presentations.

The restoration trailer is below.