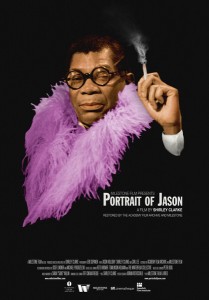 Statements by NWCFS and Music Box are at the end of this notice.

THE PORTAGE THEATER HAS BEEN PADLOCKED BY ITS OWNER; SEE LINK BELOW.

“Portrait of Jason” was essentially a legendary lost film, highly regarded but in sad shape since its first release in 1967. But it’s part of the ongoing “Project Shirley,” the indispensable Milestone Film’s effort to restore the films and enhance the reputation of the New York independent filmmaker Shirley Clarke. (As film critic Manohla Dargis has written, “Dancer, bride, runaway wife, radical filmmaker and pioneer—Shirley Clarke is one of the great undertold stories of American independent cinema.”) Released in 1967, “Portrait” had fallen to a host of the quirks of independent film distribution, but Milestone’s Dennis Doros would not give up, and the story of the eventually successful search is a fascinating tale on its own. With the financial help of hundreds of Kickstarter contributions, as well as the Academy Film Archive and Modern VideoFilm, Clarke’s antic, indelible portrait of Jason Holliday, hustler, vivid, practiced raconteur and aspiring cabaret performer, shot across an expanse of only twelve hours in Clarke’s own Hotel Chelsea apartment, was something new again. Melancholy joie de vivre permeates every instant in the film, made to look as ragged as possible yet elegant in its simple, loving directness: look at him. Whether Jason Holliday, or Aaron Payne as he was born, or the personae he took on as a black man in pre-Stonewall New York, he blooms from attention paid.  “The result, I’m convinced,” Clarke told the New York Times of her December 3-4, 1966 long night of interviewing, “is a portrait of a guy who is both a genius and a bore.” It’s also a sterling portrait of class, race and sexuality. Ingmar Bergman wasn’t often given to effulgent praise, but he was known to go all the way when he was: “The most extraordinary film I’ve seen in my life is certainly ‘Portrait of Jason.’ It is absolutely fascinating.” Kid’s onto something. 105m. 35mm Chicago premiere. (Ray Pride)

“Portrait Of Jason” plays Wednesday, May 29, at 7pm at the Music Box.

From the weekend press release: “The Northwest Chicago Film Society is tremendously grateful for the Music Box’s generosity and enthusiasm at this critical time,” said Kyle Westphal, NWCFS Programmer & Vice President. “We have an obligation to our audience to present the films we promised on our calendar and we take this expectation seriously. It is a great privilege to partner with the Music Box so that Chicagoans retain the opportunity to view ‘Portrait of Jason’ in a pristine, fresh-from-the-lab, 35mm print.”

“The Music Box Theatre is happy to welcome the Northwest Chicago Film Society to Lakeview for this special screening. There is no way of knowing what the future will hold, but it was important to act quickly to secure a venue for this important screening,” said General Manager of the Music Box Theatre, Dave Jennings. “The closing of the Portage is very unfortunate for the film community.”

The trailer, as well as the first scene restored, is below.

MAY 25: PORTAGE THEATER SHUTTERED BY OWNER OVER REVOCATION OF HIS LIQUOR LICENSE.