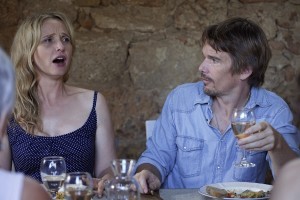 Baby, he missed that plane.

But you knew that: at the end of “Before Sunset,” (2004) even if you’re not the sort of moviegoer who believes that filmmakers must know what happens after the characters have been written away into the sunset, Jesse would not, could not leave Celine. In particular, however, the three filmmakers, director Richard Linklater and his co-writers Julie Delpy and Ethan Hawke, had no idea, they say. But that’s a good thing, because nine years on, like the nine years between that film and 1995’s “Before Sunrise,” they lived their lives. The result is an exquisite, unpretentious little masterpiece that took almost twenty years (and three lifetimes) to fashion.

I’m pretty sure I’m objectively right, but I’ve taken the last two films very close to heart for a few reasons, including having lived my own life. Delpy evokes Delpy, a brimming creative and observational force, and directors who mentored her as actor and filmmaker like the late Krzysztof Kieslowski (“Three Colors: White”) but also a woman I loved madly and not well. And “Before Sunset” spoke to better times two of the three times I saw it in a theater, both with particular exes. (And I’m borne back ceaselessly to the last line of that movie: Baby, I missed that plane. Both of them.) I am endlessly shaken and stirred by these movies. I feel like I’ve breathed them. Time folds. Lives bend. There’s so much after after any and every “before.”

Then there’s the Greek thing, an undercurrent of all things ancient, contemporary and future. Jesse and Celine are on holiday, and the second scene brings us back to their loving but warring personalities, driving into the story, toward the estate of friends of theirs in Kardamyli, on Greece’s Mani peninsula, in an extended take of ten or even twelve minutes, unbroken yet fluid enough to make Abbas Kiarostami purr out there somewhere in the dark.

But the movie also draws from contemporary Greek cinema, including co-producer Athina Rachel Tsangari, a longtime friend of Linklater’s and a co-founder of the Austin Film Society. Tsangari is an estimable director and producer in her own right, having co-produced Yorgos Lanthimos’ Oscar-nominated “Dogtooth” as well as directing the memorably off-kilter black comedy “Attenberg.” She’s an actor in “Before Midnight,” too, one of the friends around the table at lunch, which also includes a couple played by Ariane Labed (“Dogtooth,” “Attenberg”) and Yannis Papadopoulos, a young actor from 2012’s “The Boy Eating The Bird’s Food,” a miniaturist allegory about Greece’s current economic crisis. And, the beautiful, crisp Greek daylight is captured by cinematographer Christos Voudouris, who shot Lanthimos’ most recent film, “Alps.” They’re not only Greeks on the set, but figures who echo through the present moment of that timeless if troubled land. You don’t have to know that to find joy in “Before Midnight,” but it makes the film’s accomplishment all the richer. It’s French, it’s Greek, it’s all-American.

With conversation comes food: there’s a brief moment in the kitchen where Tsangari is smoking while filling peppers and tomatoes with stuffing that’s just a moment. Just a thing. Effortlessly, it’s Greece. It just is. Greece. At the lunch table, headed by an elder writer played by the veteran cinematographer Walter Lassally, there are dolmades and tomatoes cleanly sliced. In long, fluent takes in this estate that had been owned by the adventurous writer Patrick Leigh Fermor, friends exchange news and stories. Jesse and Celine are at the center, and she jokes, “We have a joke in our family, one book brought us together and the other bought our apartment.” Jesse talks about a new novel that sounds like the framework of Don DeLillo’s most recent, slim books, another eddying echo, since DeLillo’s time in Greece yielded “The Names,” one of the few English-language novels to engage and fully capture the crushing vitality of Athens. (“I love you read books in your dreams,” one character says.)

This very literary accomplishment, as in all of Linklater’s best work, is unassuming, coming through action, behavior, character. And what characters! Their persistent aggravation with each other indicates so much time spent together, so much intimacy and so little self-knowledge. (They misunderstand each other so well.) “We’re not fighting, we’re negotiating,” she says, and surely not for the last time. They sit by the sea, timeless beauty, endless vista, and an iPhone text message goes plunk. Antiquity, meet modernity: so much in the simplest sound.

And Hawke’s creased boyishness is captured in the smallest way, his practiced smile-smirk, the sloppy blue chambray shirt that always has one tail darting out. And Delpy’s profane rants and riffs trill throughout, her explosions of “Fuck!” funny and sexy and true. But Celine can study Jesse’s face and toss off, “I never noticed before but all the red in your beard is gone” or dismiss a possible life in Chicago with “Cheney, Rumsfeld, very rational men.”

The liltingly convoluted conditional tense of the last exchange of  “Before Midnight” and earlier lines like “What can I say, it’s hard out there in space and time,” seem slightly contrived, but the time bends satisfy, the thought of the work of memory within a long-term relationship, as fluid as T. S. Eliot put in in “Four Quartets,” “What might have been and what has been/ Point to one end, which is always present.” Memory. “Before Sunrise”; “Before Sunset”; “Before Midnight.” Memories.

“Before Midnight” debuted at Sundance 2013 and opens Friday in New York and Los Angeles and May 31 at Landmark Century. And before you know it, nine years will have passed and… A clip from the film is below.