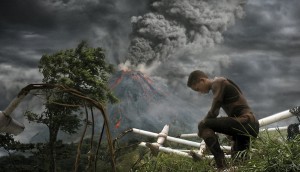 As tens and tens of millions of dollars worth of family therapy and nepotistic eyewash, the Jaden Smith-solo-act-family-adventure “After Earth” sounded bleak from the get-go. Don’t care. Won’t care. Can’t care. Those forebodings briefly dissipated as the lights went down, but quickly, director M. Night Shyamalan did not fail to disappoint even with the lowest of expectations. Co-written by Shyamalan (“The Happening”) from a story credited to Will Smith, its faults include having its characters speak at all, alternating pseudo-technical doublespeak with affirmations about vanquishing damaging past memories from your soul. “Danger is real. Fear is a choice.” Who’s being indoctrinated here? Is this a teachable moment being offered up? A thousand years after humanity abandons Earth for “Nova Prime,” Jaden Smith plays Kitai Raige, scion of “Prime Commander General Cypher Raige of the United Ranger Corps,” embodied by his father, Will Smith, and his modest yet bustling thirty-first-century soul patch. Cypher takes Kitai on a take-your-teen-to-work adventure and their spaceship crashes on a forbidding planet, duh, Earth. The supporting cast is largely animated carnivores: this is Jaden Smith’s movie in almost every frame, with Will Smith relegated to sitting in an easy chair in a crashed spaceship (named Hesper, also a steamship that sank in Lake Superior in 1905), slowly losing consciousness in an easy chair while observing digital projections of his son’s exploits in the carnivorous wild and monitoring his stress. There is only personal survival in this world, and nothing else matters. All else is oblivion. (The film was largely shot in the environs of Philadelphia.) Weirdly, but not engagingly, it’s a virtual simulation of the movie within the movie itself. Kitai brings up his reading of “Moby Dick” a few times, which is never integrated into the story except in design elements. “I’m reading ‘Moby Dick’!” “Your mother told me. That’s great!” “It’s a real book! From a museum!” The Prime Commander General’s luxury condo in the sky is shaped like the great sails of a ship, and on land and in space, the décor tends to other sail-like forms, rattan and feathery objects you see next to expensive, uncomfortable chairs across the way in luxury resort lobbies. All told, the indifferent design of “After Earth” makes it look like a hundred-billion lira 1960s Italian knockoff of itself. (There is a flip-flap flip-flap intervention of an opaque white plastic curtain after the spaceship crash that brings unpleasant memories of the compositions of Shyamalan’s “Lady in the Water” to mind.) Even ten centuries in the future, set designers still waste platters of brightly colored fruit. Seatbelt latches make small hydraulic hisses that sound like tropical cockroaches. Choices like those seem more odd than organic. More disconcerting is Jaden Smith’s near-total lack of affect, having a blank, desperate look that alternates with a furrowed brow of alarming depth, exceeding even the fleshy crenellations of Vin Diesel’s forehead. Kitai is unprepared. Jaden is bereft. The Smiths speak in some sort of post-apocalyptic mutter, not quite full-on pidgin but definitely patois: “da ert,” “ah feehl.” There’s something about “ghosting,” which makes you invisible to your adversaries, as in “Ghosting is when you don’ have a trace o’ feah” but anything meant to resemble science comes at the audience as furious, hapless jabber: “Your neurobiological system is telling you to run, [but] your pores have already opened up to let an imperceptible amount of pheromones into the air.” Ten centuries on, “I’m good to go” is still conversational currency. Still, any reiteration of “Fear is not real. It is a product of thoughts you create. Do not misunderstand me. Danger is very real. But fear is a choice.” Or the command to pause in prayerful posture, “Take a knee!” beats a half-dozen “Maybe I’ll work with you in turbine division together!” (In one scene, Kitai “takes a knee,” Tebow-style, in front of a hugely erupting volcano on the horizon line that looks like the art from a freshly printed paperback edition of “Dianetics.”)

“Maybe the tagline should be, ‘If you loved ‘Tree of Life’ and ‘Jurassic Park,’ you’ll love ‘After Earth,'” Shyamalan tweeted gleefully from the site of his job during production. Presumably, he’s describing an extended animated sequence where atop a high hill, Kitai is surrounded by helix swells of grackles and blackbirds, and the camera turns to reveal waves and waves of burly bison. To the wonder, ho! The less said about the immense bird of prey that briefly adopts Kitai, or the “hog hole,” the better. “After Earth” has the weird conviction that it’s making sense, some distance from the John Travolta-starring “Battlefield Earth,” but certainly in the same school. Life lessons are being ladled here, and little else. The film’s clean widescreen compositions are abetted by veteran cinematographer Peter Suschitzky, whose credits include “Cosmopolis,” “The Empire Strikes Back,” “Lisztomania” and “The Rocky Horror Picture Show,” “It Happened Here” and “Privilege.”100m. Widescreen. (Ray Pride)