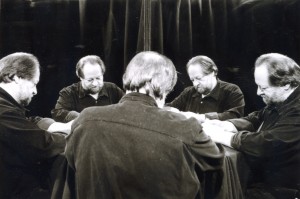 Molly Bernstein and Alan Edelstein’s small taster of a life, “Deceptive Practice: The Mysteries and Mentors of Ricky Jay” is more elegant than its title, silk brocade to its smattering of smoke. Like the best work of the lifelong conjurer and sometimes showbiz shaman, it works from patter toward something far more sinister about his “very peculiar profession”: less mysterious than mysterioso, more unsettling than mere legerdemain. Reportedly years in the shooting and assembly, “Deceptive Practice” depicts a lifetime in sleight-of-hand running parallel with a keen fixation on the history of what came before. Jay’s work as a historian of the card arts and others informs his every glancing bit. Best: none of the secrets of his trade are revealed by his own hand. Small miracles are everywhere, writ small, remembered large. It’s a spellbinder. With a bounty of archival footage of Jay’s long career, as well as friends and colleagues like consiglieri David Mamet. Narrated by Dick Cavett. 89m. (Ray Pride)

“Deceptive Practice: The Mysteries And Mentors Of Ricky Jay” opens Friday at the Music Box. The trailer is below.