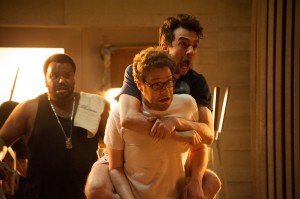 Tragedy plus time plus… what is it makes comedy? The end of the earth and all civilization plus my own minor wickednesses? “This Is The End,” the first feature directed by writing partners Seth Rogen and Evan Goldberg, is Apocalypse Foul: Why not unsheathe all those petty insecurities as the seals of Revelation are cracked, at a party a few side streets just off Melrose? The conceit is that Rogen and his friend and fellow Canadian Jay Baruchel, playing mirror versions of the movie versions of themselves under their own names, interrupt a long weekend of weed and videogames only to wind up at a party at James Franco’s house when the state of California begins to crater and quake and flame and eventually demons rise not only from the id but hell itself. Michael Cera’s there, as a whippet-thin, drug-crazed horndog; Danny McBride, uninvited, wakes from sleeping off booze in the bathtub; Craig Robinson confidently inhabits a lack of confidence; and Jonah Hill? Jonah Hill has secrets. As do most of the other partygoers who flash comically before our eyes: Emma Watson, Mindy Kaling, David Krumholtz, Christopher Mintz-Plasse, Rihanna, et al. Viciously funny, memorably profane, “This Is The End” also stands out because it really, really believes in Rapture and good acts and ribald jokes about men in catastrophe: there’s a saved sinner’s sincerity burning amid Hell blazes. David Gordon Green’s editor Zene Baker is on hand, as are a plenitude of japes about “Pineapple Express.”106m. (Ray Pride)