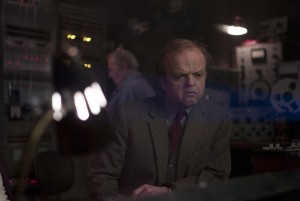 Deliciously idiosyncratic and genially creepy, Peter Strickland’s “Berberian Sound Studio” is a tart treat for the ear and the eye. In 1976 Italy, sound designer Gilderoy (Toby Jones) is summoned to the dank and dismal chambers of a rundown studio to provide the sound effects for a horror exploitationer called “The Equestrian Vortex.” On one page, this rude, taut tone poem is an aural nightmare in the vein of the metacinematic play of Michael Powell’s “Peeping Tom” or Brian DePalma’s “Blow Out”; on another it’s a cheekily disgusting catalog of squish and splorps and splats and screams and shrieks and tremolo and falsetto and rip and slash. Steeped in atmosphere, “Berberian Sound Studio” manages to be an experimental film, a chamber drama, and a neat psychological horror in its own right. The clammy production design, swaddling in shadow, manages to be both rubicund and cloacal, and the apocryphal film being mixed sounds like a brilliant replica of a barrel-scraping Giallo movie of the time, down to a gorgeous, trashy title sequence. We don’t have to see the movie: it’s projected all across Jones’ fine, expressive face. The blinking “Silenzio” sign is but one small smirk in the loving murk. The score by Broadcast is one more deliciously discomfiting component. With Tonia Sotiropoulou as the loveliest of terrible secretaries. 94m. (Ray Pride)

“Berberian Sound Studio” opens Friday at Siskel. The UK trailer is below.