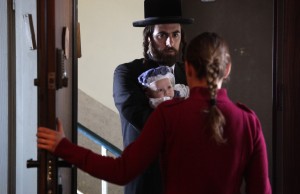 (Lemale et Ha’halal)  Jane Austen in Tel Aviv, writer-director Rama Burshtein’s “Fill The Void” describes a space hidden from view: not only a segment of Orthodox Hasidic life in contemporary Israel, but the heart, the heart of a young woman whose life is shaped by the choices of others and by the cumulative snips of fate. Eighteen-year-old Shira (the luminous Hadas Yaron, large and lovely eyes ever wary and brimming) is about to wed in an arranged marriage, but cascading reversals, including cold feet from the groom-to-be and a sudden death, alter her path repeatedly. “Fill The Void” is shockingly fine, especially for a first feature, including an ending instant that is confrontationally ambiguous and a heart-stopping scene that is blocked and acted and refracted in a matter of millimeters. A man and a woman, alone, on a path at night, forbidden to touch, speak, confront, describe passion: the man moves closer. That’s all. The smallest of moves, infinitesimal motion. The world tilts on its axis. It’s dizzyingly perfect, and not alone among small gestures that are as explosive as anything in the mind of the makers of modern major motion pictures. The path to self-knowledge is a fantastic subject, and Burshtein does unforgettable things with it. With Yiftach Klein, Irit Sheleg, Chaim Sharir. “Fill the Void” was Israel’s 2012 Foreign Language Film submission. 89m. (Ray Pride)

“Fill the Void” opens Friday at the Music Box. The trailer is below.