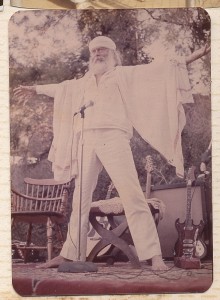 Directors Jodi Wille and Maria Demopoulos found 1970s flashback kismet in making “The Source Family,” the saga of a photogenic California sex-drugs-and-rock ‘n’ roll cult that also compulsively chronicled itself, in image and song. The breadth of archival footage astonishes. With six-foot-four Father Yod, aka Jim Baker, a guru who began as judo instructor, Marine and alleged bank robber, hedonism was the order of the day, of every day. Starting with a West Hollywood health-food restaurant (famously featured in “Annie Hall” when Woody Allen orders “a plate of mashed yeast”), Yod’s conquests increased and the family, which grew to around 150 lost souls, recorded more than sixty psychedelic albums; distributor Drag City’s inspired tagline for the film is “God Has A Rock Band.” In long robes with phenomenal long hair and flowing beard and riding a Rolls Royce, the malefic huckster’s exploits compel even as his apparent charisma seems hard to fathom from four decades’ distance. Musically, however, the vibe abides. With Isis Aquarian, Electricity Aquarian. 98m. (Ray Pride)

“The Source Family” opens Friday at the Music Box. The trailer is below. A feature on the film’s music can be found here.