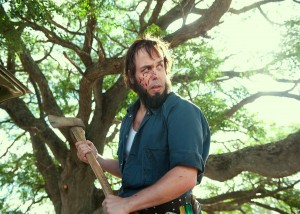 A blend of horror and comedy is the kind of tonal impertinence that should be near-impossible to pull off, but that’s not stopping filmmakers these days, especially bloody-minded Australians like debut writer-directors Cameron and Colin Cairnes, whose script won a Slamdance screenwriting nod. In “100 Bloody Acres,” two brothers run an organic fertilizer company that relies on bits and pieces of dead car crash victims. Money and blood, city vs. country: all the motivations you need for a missile-speed ride of inventive (if low-budget) gore and gags in the countryside near Adelaide. They don’t want to be killers, they just want to make a living in tough times. In the straightforward tagline from Music Box Films’ new horror arm, Doppelgänger Releasing, “They’re not psycho killers. They’re small business owners.” And the Cairnes? They’re talents to watch, mingling tones with outrageous aplomb and also turning out an extremely good-looking entry in a genre that seldom gets such loving care. With Damon Herriman, Angus Sampson, Anna McGahan, Oliver Ackland, Jamie Kristian. Widescreen. 91m. (Ray Pride)