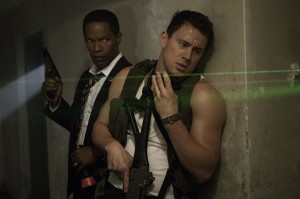 “White House Down” is the best kind of nightmare-fulfillment fantasy as Nakatomi Center sends along a change-of-address notice: “John Cale, c/o 1600 Pennsylvania Avenue.” Channing Tatum is the Secret Service aspirant of that name, close enough to “John McClane” of “Die Hard” days (as well as the Welsh musician), whose unsatisfactory interview to join the White House Secret Service detail with his politico-in-the-making eleven-year-old daughter in tow just happens to coincide with a wildly plotted attempt to bring down the U. S. Government. German-born director Roland Emmerich hails and nails the White House once more (after “Independence Day” and “2012”) to gratifyingly entertaining effect, working from a giddily propulsive script, a slalom of coincidence and contrivance by screenwriter James Vanderbilt (“Zodiac,” “The Amazing Spider-Man”). This isn’t a Guilty Pleasure, just a pleasure.

Moments of high drama and world endangerment are matched with Cale’s concern for his daughter, and tension-snapping banter alternates with chewy political chat. Cale’s riotously cute, duck-lipped prehensile policy wonk of an eleven-year-old daughter, Emily (Joey King) is the figure whose slight shoulders the story falls upon: can a hopeful, earnest, informed child like this live to see a time beyond cynicism and calculation? Will her bristling intelligence save the day? You know, of course, the answer is Yes. Yes and Yes. 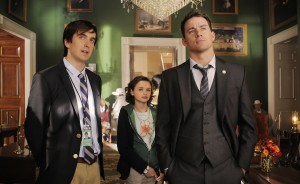 “It’s a straight action movie with slight political undertones done in the way I like to do movies so they don’t take themselves too seriously,” Emmerich told the Los Angeles Times this week. “Sometimes I have a real problem with that. There was a time in the 1970s and 1980s mainly where people made fun movies which were not taking themselves too seriously. I don’t know what happened.” But beneath such play, there’s also a level of political insinuation rare from any studio movie, let alone one in the $150 million range. While James Woods’ white flattop as the outgoing head of the Secret Service Martin Walker evokes Nixon White House Chief of Staff H. R. “Bob” Haldeman for the historically minded, Jamie Foxx’s President Sawyer is in many ways a ringer for President Obama, down to expressing a fear that the constraints of Congress and paid-for politics would prevent him from ever accomplishing history on the level of a Lincoln. (There are lots of quick slingshot snaps like President Sawyer’s bedside table holding a biography of Mandela and a drawerful of Nicorette.)

And who are the bad guys? The handful of blood-grudge-bearing hipsters and Caucasian domestic terrorists committing the attack? (A White House tour group is sneered at as “sheeple” by one of these brainiacs.) Nope: “These are powerful people who contribute to both sides,” a character says, identifying defense contractors who will never give up profit and power. There’s prickly lip service here to many such things, including the precept of Posse Comitatus. It’s screenwriting Brownian motion: political implications expand to fill a vacuum.

Details are timely, often prescient. A new Iranian president has been elected. YouTube and WikiLeaks and Twitter and Apple and the NSA are knowingly referenced, as is Emily’s video recording of the siege of the White House, uploaded, gone viral and then transformed immediately into irresponsible journalism by network television on-camera “talent.” “The work of Al Qaeda or some other Arab group,” a political figure intones with metronomic kneejerk. But Emily Cale belies that as citizen journalist and “little hero.” (As Preston Sturges paraphrases Shakespeare at the end of “Miracle at Morgan’s Creek,” “Some are born great, some achieve greatness, and some have greatness thrust upon them.”)

Like twentieth-century Danish expatriate filmmaker Douglas Sirk, Emmerich traffics in heightened kitsch, epic play with icons and finally a belief that the most sincere statement in the midst of modulated mayhem can have all the wrenching power of fine melodrama. More to point, Emmerich does not fear the sort of majestic pulp that would make Sam Fuller chomp down approvingly on his cigar, and he redeems his use of the American flag unfurling in battle in “The Patriot” with a similar image’s grand invocation at the film’s climax. The secondary casting of middle-aged men runs to the type of Fox News’ Howard Kurtz and a weedy Rush Limbaugh surrogate is relentlessly derided and prodded with rude relish. The cinematography by director of photography Anna J. Foerster (who is also a television director) is sometimes achingly beautiful, taking in tableaux Washington, D. C. by dawn and dusk that are as yearningly romantic as any of the District in memory. (The film is bookended by helicopter swoops along and above familiar landmarks.) Perhaps too much so at moments, such as a motorcade rushing through the frame, scattering orange fallen leaves along the street as the Capitol Dome, in flames, implodes in distance.

The wide-angle widescreen compositions are strong as the camera darts and ducks through the hallways of the invented White House corridors. The weave of practical sets and computer effects is pretty much seamless. In the end, “White House Down” is a fable about the possibility of the next generation of optimistic, not-yet-jaded activists and politicians who might rise from the ashes of our involvement in too many secret things and dangerous places. With Richard Jenkins, Jason Clarke, Maggie Gyllenhaal, Michael Murphy, Nicolas Wright, Lance Reddick, Matt Craven. 131m. (Ray Pride)