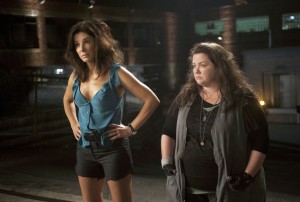 In Paul Feig’s wonderfully diverse, multimedia career—TV, films, memoirs, children’s books—a few things stand out: creating “Freaks & Geeks,” making Apatow-style raunchy comedy ripe for actresses in “Bridesmaids,” and being one of the sharpest dressers in the business. The day we talked, the onetime standup was wearing an acutely tailored deep-blue suit, lush, matching tie. Precise, pointed, ruthlessly efficient. (I knew not to dress to compete that day.)

“The Heat,” his latest, is a tip of the hat to 1970s buddy-cop movies, with the inspired pairing of two capable Type A cops, a straitlaced FBI agent played by Sandra Bullock and a Boston brawler in the person of Melissa McCarthy. It’s a rollercoaster of a comic showcase for both of them. Feig prides himself on attempting emotional authenticity in comedies, and I wondered if in all the ambitions of his career he thought he would become known for the capable calibration of profanity and scatology. Feig laughs. “I embrace it, I have a very high and low sense of humor.” Goodhearted filthiness. “Exactly, that’s right. If everything is too clean, it’s no fun.”

But then again, Feig did make a family movie once upon a time. “I doubt I will be doing that again, but it was fun. But I have much more fun doing things for adults, I think it’s just, there are more ways to be funny with it, that are honest and real.” The long road from “Freaks & Geeks” to “Fucks!” and “Shits!”

Latter-day CGI movies suggest that anything’s possible, but there’s no logic. “The Heat” stays reasonably close to what’s possible, to crashing comic effect. “Yeah… I am very, very hung up on realism and reality and honesty in the stakes of something. It’s why I have a hard time enjoying a superhero movie where you know two guys are fighting and one guy is knocking another through a building, and the other guy drops a car on the other guy and like you were saying, nobody is getting hurt. What am I investing in is Melissa and perpetrator falling off a tall fence, and crash onto the cement, and you think. ‘Okay now they are hurt’ and the chase is going to continue and they are both hurt so they are running very slowly. I think it is more human and I just find that’s what’s funny, people interacting as real characters, three-dimensional people that have hopes and dreams and can be hurt and can be insulted and have hubris. And that is funny because that’s what we deal with all day, the people we deal with, and how we have a laugh on the people we know, picking them apart. That kind of honesty is key to my kind of comedy.”

Jonathan Demme has said that in the old days he liked to see movies on opening weekend on Hollywood Boulevard, because he believed that any roomful of 300-400 people in the dark are smarter than any single person. “Yes,” Feig says. “We decide so much, and this might sound, not artistic to some people, but through test screenings it becomes very scientific, mathematical at a certain point, because we are loading in all the things we need, like all of the character moments and all of the jokes and the things we think will get a laugh, and you know, to what he said about the audience, we try to create that early on, I mean like two-to-three weeks into my director’s cut I’ll do my first recruited screening, you know, bring in 500 people. I try not to make it too shaggy, I know some people would do like two-and-a-half hours, but then nobody can tell what they are watching at that point. I think the first run of this was like two-fifteen, and you just have to see what is getting laughs and what isn’t and it’s to the point where they are smarter than anyone, and it’s true, things that we are convinced are going to kill, will get nothing and then the opposite, where you don’t think something will get any laughs. [When McCarthy snarks at Bullock] ‘All right, Rosetta Stone,’ is a perfect example, nobody is going to get ‘Rosetta Stone’! And it gets a sizable laugh, which is like, who knew? People were reading that ad in magazines the whole time. Then you know, just every two weeks we would bring a new audience in, we were bringing new stuff in, we were trying new things and paring it down, paring it down, and swapping it out, so by the time we get to where we are about to finalize the cut, we’ve had about ten different test audiences watch and we know it works for the majority of audiences.”

You’ve got about ten minutes to create the world. “One-hundred percent, that is the key, keeping a consistent tone and what the rules of that world are. I so agree with that, because that is where so many comedies fall off the wagon, especially when you get into a movie like this where you are trying to be funny, but you have a bad guy plot, but to have the bad guy just be funny and goofy hurts you, because then you have no stakes, or if you are setting a world where there is no danger. Then it’s harder to latch into that, and honestly, that tone is what we are trying to guard the most through all that process. You have these jokes and think ‘Is this going to be funny?’ But also, ‘Is it going to violate that reality?’ Or, ‘Is it going to play outside of somebody’s character?’ And you have to be brutal about that.”