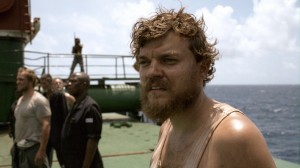 (Kapringen) Writer-director Tobias Lindholm’s “A Hijacking” is a taut thriller about Somali pirates hijacking a Danish vessel in the Indian Ocean, but it’s also a lesson plan in negotiation tactics. Danish filmmakers are famously supportive of each other, especially at the script level, and it shows in movies from filmmakers as diverse as Lars von Trier, Thomas Vinterberg (the upcoming “The Hunt,” co-written by Lindholm), Nikolaj Arcel (“A Royal Affair,” co-writer on “The Girl With The Dragon Tattoo”) and now Lindholm’s cracking actioner. There’s so much to admire in character detail, implicit motives and simple dramatic tension.  The drama pivots on negotiations between the pirates and the shipping company’s bull-headed CEO (Søren Malling) over a $12 million ransom demand. Entrepreneurship of the criminal kind meets capital of the established short to relentlessly dramatic effect. The months that pass are shown in two confined locations: the increasingly filthy ship below deck and clean, domestic Copenhagen office suites. Slowly, surely, the stakes rise. It’s straightforward, memorable filmmaking. Lindholm’s other credits include contributions to twenty episodes of “Borgen.” With Pilou Asbæk, Abdihakin Asgar, Roland Møller, and Gary Skjoldmose Porter, playing the role of a hostage negotiator, his real-life profession. 98m. (Ray Pride)

“A Hijacking” opens Friday at the Music Box. The U. S. trailer is below.