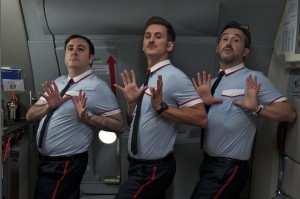 Almodóvar’s latest, “I’m So Excited!” (Los amantes pasajeros) is a bite-sized concoction of camp, color and bitter social critique, as well as an intermittent musical and a comedy that winds up sharing more than an exclamation point with “Airplane!” A Peninsula Airways flight to Mexico City is left circling above Spain. That would be as in the Iberian Peninsula, but of course, with a little “penis” in it. (Fellatio is predominant on the in-flight menu.) The reigning raunchiness elevates the brute cynicism of the film’s disappointed politics. The economy section is gassed to keep them from causing a ruckus and the handful of passengers in business class are left to its own decadent devices as the attendants spike the tequila with mescaline. The blunt metaphors play cleanly, as time passes and La Mancha airport remains a mirage below the clouds as their landing gear fails to engage. The boldly colored and designed transgressions flow freely: Almodóvar has called it his gayest film since his 1980s emergence with movies like “Women On The Verge Of A Nervous Breakdown” (1987). My one viewing has been on a big screen in Greece, in the original Spanish, with Greek subtitles. I understood more from the characters’ giddy, terminal slapstick than from the language, but it remains infectious behind the blockade of two half-understood languages. (The Greek audience’s laughter was as dark as the particulars of the parable, their country having been stomped on right and left in the months before the European Union and conservative Spanish government took the deadly “austerity” fad further.) A properly translated wealth of filthy double entendres surely awaits me. With Antonio de la Torre, Hugo Silva, Miguel Ángel Silvestre, Laya Martí, Javier Cámara, Carlos Areces, Raúl Arévalo, José María Yazpik, Guillermo Toledo, José Luis Torrijo, Lola Dueñas, Cecilia Roth, Blanca Suárez, Paz Vega, Penélope Cruz, Antonio Banderas. 95m. (Ray Pride)

“I’m So Excited!” opens Friday at Landmark Century. The jaunty trailer is below.