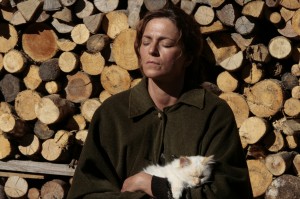 (Die Wand) It’s nature versus woman in Austrian director Julian Roman Pölsler’s haunting “The Wall,” a high-art edition of the high-concept notion behind the Stephen King-penned TV series, “Under The Dome.” Or, more appropriately, Robinson Crusoe in the Alps. Our unnamed protagonist (Martina Gedeck, “The Lives of Others,” “The Baader Meinhof Complex”) takes a trip with friends to the mountain, but they go missing one day, and she discovers herself shut off from the larger world by an invisible wall.  The film’s narration (in English)—drawn from a 1968 novel by Marlen Haushofer, and in the form of a journal of her discoveries as she learns to live off the land across a long stretch of time—is incessant, yet soothing, part and parcel of the genuine hold the film maintains throughout. (A sample swathe: “There is no emotion more sensible than love. It makes life more bearable for both the lover and the loved. Only, we should have recognized early enough that this was our only chance, our only hope for a better life.”) The widescreen images of the Austrian landscape and the lovingly lit cabin interiors are unfailingly gorgeous, but Gedeck’s the key asset: her fine, expressive features do almost as daunting a job as the words, words, words we hear. Smoking. Eating. In repose, by night, animals baying in distance. Hunting in the gleam of a forest full of rain, features scrunched under a knit watch cap. Always: what a face, as seasons turn, as time refuses to stop. Pölsler is also deeply enamored of the nobility brought aboard by a bursting bundle of Bach, but several pop songs from a car radio have their own offhand grace. With Karl Heinz Hackl, Ulrike Beimpold, Wolfgang Maria Bauer, Hans-Michael Rehberg. 110m. (Ray Pride)

“The Wall” is now playing at the Music Box.